It's Battleship, on your Nintendo.

At the title screen, press Select on Controller 2 to scroll through the music.

The European version has a language select screen on startup that lets the player choose between English, German, French, and Spanish. 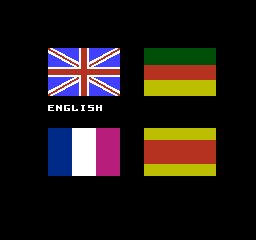 The European version removed the ending song, with the ending cutscene using the title screen music instead. This is presumably due to adding text for a few languages.