The story of a traumatized Elliot Page and their invisible "friend".

There are some disturbing voice clips in the game's files that suggest that, at some point in development, it was still possible for Jodie to get abused during the bar scene in the Like Other Girls chapter. In the final game, Aiden comes to the rescue and prevents the abuse from occurring. If the player doesn't leave the bar before the attempted abuse, a tiny bit of the removed abuse scene can be seen at the very end of the game, when Jodie is at the final part in Black Sun.

In the scene where Kirsten (or Brenda as she's called in the debug mode) opens her birthday gifts, she only opens Jen's gift before opening Jodie's, however, the full dialog shows her opening Emma's gift as well.

After the Hauntings chapter, and the briefing at the DPA, when you sit down with Ryan, there's some unused dialog to one of the options. If there's audio for this is currently unknown. When you select Regrets at the second option, you will hear this:
https://www.youtube.com/watch?v=MK7i_BQ4qFU&t=2m

The dialog for this part is as follows:

The last sentence is missing in the game, for the better though.

Every single function name, constant name or value and just about any other dev related text is still readable from the precompiled Lua Dynamic Communicator (DynCom) chunks.

A Dynamic Communicator is a block of events, parameters and attributes for a certain script function in the game. These are formatted as precompiled Lua "function chunks". The values of these "settings" are stored either compressed (as a segs entry, which is a split up ZLIB archive), or uncompressed (as a QZIP entry, which is funny, because "ZIP" normally indicates a compressed file entry). The name of these blocks is COM_CONT, which is short for Dynamic Communicator Container. Aside from storing just values as Lua functions, modified versions of Dynamic Communicators are also used for storing the "actual" scene scripts, model data, animation data, (very small amounts of) audio, video (like the sport scenes and cartoons on the in-game TVs), textures, dialog sequence text, and more.

Here are the most notable strings (constants) in the precompiled Lua chunks found so far:

Inside the (decrypted) main executable EBOOT.ELF are many development-related strings. Here are the most notable ones found so far:

And there are many, many more strings. In fact, over 22000 strings!

There's a pretty big, raw script hidden in the game's BigFile_PS3.dat file at 0x5F800. If this script is actually being used or not is currently unknown. The script defines a ton of "Dynamic Communicators" for various functions of the game. Aside from that, and many other initalization stuff it does (like defining every "story-changing" variable), it also defines the different options that can be used while booting the game. Most of these debug options can be controlled from runtime.sdat. Part of this script consists of reading the values from the .sdat file, and then setting various variables accordingly.

For example, on line 5654 of this script there is a "semi"-switch statement which checks for the following values in runtime.sdat's BUILDSONY key:

By decrypting the runtime.sdat file, found in root\USRDIR\, a standard INI file is outputted. Notable entries include: 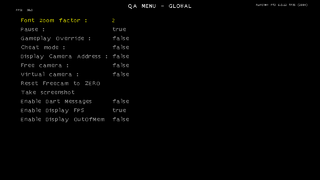 After changing the DebugMenu entry in the runtime.sdat file, re-encrypting and replacing the file in the root\USRDIR\ folder, press L3 in-game to display a "QA Menu". Enabling any of the options will do as it says on the tin, and screenshots are stored in root\USRDIR\ in TGA format. The "GLOBAL", "DIALOGS" and "ANIMATIONS" submenus can be cycled with L1 and R1.

Using the "Free camera", it is possible to see...more of Jodie's model during the shower scene than what is normally shown. The same can also be said for Aiden at another point in the game.

You can enable the cheat menu by setting either:

It provides access to all chapters and special production environments, such as the "Sandbox Sound Mode".

Setting UseCinemaRatio=0 in runtime.sdat will remove the cinematic black bars on the top and bottom of the screen.

The European and Japanese versions toned a couple instances of the more excessive violence from the game, including Jodie ramming a pole into a scientist's neck and Ryan Clayton's torture scene.