The following lines, also in Arc_XSubtitles.INT are also unused, but seem to reflect an alternate concept for the tailor machines instead of the stereotypical Jewish tailor used in the other subtitles and final game. Concept art shows an alternate "Father Franklin"-themed tailor machine, so these could have been intended for that.

Cornelius Slate has an unused fight mechanic to fight the player. He has really high movement speed, more health than normal enemies, and no actual firearm besides Shock Jockey. He will run around and throw multiple traps at the ground. When he is far enough away from you, he will throw them at you. When killed, he will not drop any loot.

An unused area can be found far away in the ending scene with Elizabeth exploring the lighthouses. It features a series of snowy cliffs and a bridge leading to a very unfinished observatory, which is quite interesting as there are no such structures anywhere else in the game. The observatory has a working door, though opening it causes you to fall into an infinite void. 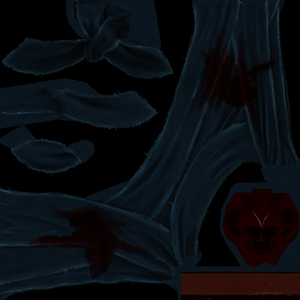 An in-game choice at an airship station can lead to Booker DeWitt's hand being stabbed by a ticket vendor. Interestingly, the textures for the bandage show a devil face which is never seen in-game, as it's not covered by the UVW map. 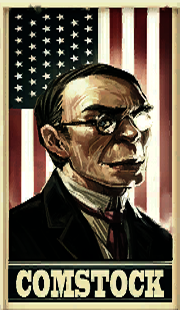 Some distant building models in the game contain an earlier Comstock graphic. The building models could very well come from earlier builds, perhaps as old as 2010. Comstock's appearance is completely different from his final design, looking a bit more intimidating.

As with the early Comstock poster, a few distant building models contain an unused poster for a vigor called "Mesmerize", almost certainly an earlier title for the Possession vigor. Interestingly enough, a poster with almost the same wording (albeit a completely different image and design) for Possession can be found in other parts of the game. 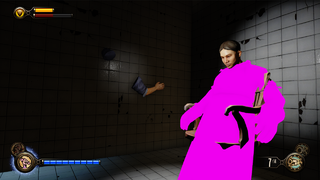 In the room in the Good Time Club where Booker and Elizabeth find Chen Lin's body, there is a small inaccessible room adjacent to the room through the walls that contains an unknown, untextured model sitting in a chair as well as a model of Booker's right hand jutting out of the wall.

If the room is accessed before triggering the Chen Lin cutscene in which Elizabeth opens a tear, Booker's arms will be facing towards the center of the room, making both of them visible. The untextured body and the room itself remain otherwise unchanged.

The cubemap's filename suggests that this cubemap is a remnant from the cancelled multiplayer portion of Bioshock: Infinite.

Appears to be an apartment of sorts. The artstyle for this particular cubemap is quite plain in comparison to the Bioshock series' reputation for using older art styles.

Features a street littered with garbage along with many buildings which appear to be boarded up. There appears to be a clock at the end of the street. It is possible that this street is meant to be in Paris, a location mentioned frequently throughout the game.

There appear to be several unused music files located in the audio section of the game data. Most of them seem to have only minor alterations in pitch; however, some appear to be quite different.

Text for an unused rant on eugenics exists in PreCoalescedItemAssets.INT:

This appears under the headings of both [TestAudioLogItem XAudioLogItem] and [Consumable_AudioLog_Base XAudioLogItem]; the two versions are nearly identical except that the latter replaces the location and date with "Location Unknown" and "Date Unknown" respectively. Note that the game is set in 1912, and that The Little Red Bottle is not a location in it. This, along with the heading names, suggests this may have just been used for development purposes and never intended to appear in the final game.