Black & White is a god game in which the player owns a creature and attempts to convert people to his cause. Nothing to do with Pokémon. 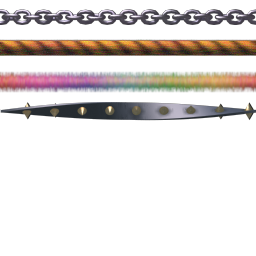 As you know, we have the leash of learning, leash of aggression and leash of compassion. But there's a texture for fourth leash in form of a chain. Judging by its appearence and order, it's a free will leash, but its true use is still unknown.

Guide was originally unable to speak.

African tribe is mentioned quite a lot in the game files. Well, actually, it's used in game, but appears only in skirmish mode and uses textures of an Aztec villagers, Egyptian buildings and even Celt worshipping music. It was most likely planned to be a full tribe, but left partially unused, using placeholder textures and music.

Remember that soccer field that you can unlock by add-on and eight scaffoldings? It originally was already in-game and required six scaffoldings. And moreover, it had a use - satisfy play desire.

Judging by what stages villagers can have, worshippers originally could feed themselves.

In Info6.txt you can see a lot of mentions of the Temple building. It's definitely not the one we have, as it is called Citadel in the game files, and it also has a variant for each tribe. Nothing else is known about this building.

It was the only way to kill him. Now he's completely immortal.

An armageddon miracle for the multiplayer. Most likely works the same than in Populous (turning all the people into warriors and making them fight for death).

Skeleton army miracle! In (now defunct) Planet Black and White e`pedia, you can find out that it was used by Norse. Could've been replaced with wolves miracle. Skeleton army concept was later re-used in the sequel's expansion Battle of the Gods.

Firework miracle. Could be used to impress the people.

Originally, wonders only could be built if your people had no desires, indicating by their new wonder desire. Most likely was removed because it was nearly impossible to satisfy all their needs, especially as evil.

Desires were originally located near the Village Centre.

In the sequel, there is a third, bronze scroll type. But it was originally going to be featured in the first part as well, serving the purpose of an information scroll.

Multiple types for fields. In the actual game, there is only wheat fields.

Whatever food you use, be it fish or meat, it's always looks like grain, and it's quite awkward. Looks like developers originally planned to make food different. Strangely, there is no fish.

As we know, there's two abode ranks: small and large. But if you look into Info4.txt, you can see that there were three: shack, tent and hut.

If you look into Scripts>Quests, you can see some unused ones: 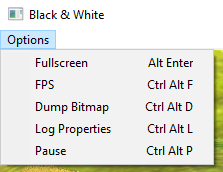 Inside runblack.exe is a normal window menu containing items which appear to be debug functions. This menu is easily accessible in later fan patches, because they feature an option to run the game in a window. However, none of the items or their shortcuts appear to do anything.

In addition to parameters enabling player to go straight to skirmish mode, load the pre-intro video, start a new game, and force or disable internet connections,[1] runblack appears to contain the following parameters: