Dungeon Keeper is a strategy video game that was the last to be developed by Bullfrog Productions under Peter Molyneux.

In the game, the player attempts to build and manage a dungeon or lair while protecting it from (computer-controlled) "hero" characters intent on stealing the user's accumulated treasures and killing various monsters. The game was met with high critical praise and positive gamer reaction, resulting in a sequel being made, along with many mods and editors to improve the experience. 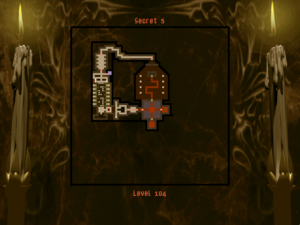 There are six possible Bonus Levels to be located in the game, including the "Moon" level. However, you can only gain access to five of them in unmodded games.

The "Locate Hidden Realm" bonus crate should have been located in Level 14, "Sleepiburgh", to the opposite side of the "Transfer Creature". The crate itself is not in the game, possibly due to a mistake by the programmers where they forgot about it or (accidentally) erased the crate.

Using mods such as KeeperFX or any similar editing tools, you can obtain the bonus crate.

There is a hidden and unused test level, numbered 1000, that appears to contain and be a test for every type of slab in the game.

In the levels directory, each level has a .FLG file. This appears to be an older and less sophisticated format for the map itself, lacking data for certain features that the .SLB format (used by the final maps) supports. Some of these maps have significant differences to their corresponding final version, whereas others appear to be the remnants of levels that did not make it into the final game.

In the levels directory, there is a MAP00001.OLD file, which is a script file for an early, cut, level. It was last modified on 27 February 1997. There are CREATE_TEXT commands, which are all commented out in the other scripts and are used to create custom objectives, one of which suggests the Fly at this stage did not require food. Also of note is that there are CREATURE_AVAILABLE commands applied to the hero player, suggesting that the hero player could have attracted creatures like the player does.

The Disease Creature Spell appears to have been cut quite early on, as it does not have image files in with the other creature spells. However, this may just mean it shared the images with the Keeper Spell.

Little information is known about this Creature Spell, but references are made to it by the manual:

It is believed to work exactly the same as the Keeper Spell, possibly a weaker version of it. Considering the massive cost and devastating ability of the Keeper Spell of the same name, it is very likely the Creature Spell was cut for being incredibly overpowered.

The Chicken spell is a cut Creature Spell, likely due to being unbalanced.

Not much is known about it, but references are made to it by the Dungeon Keeper manual:

From this, we know its effect would have been identical to the Chicken Keeper Spell, but would've been fired as a projectile.

The Illumination spell is a cut creature spell. While graphics for it exist, it does nothing, if added into the game by editing files. It was possibly cut due to balance issues.

In 1996, early into the post-revamp game's development, there was a Slap spell, which was replaced with a whip spell called "Discipline".

Among the images in the game's files, there exist icons of a whip grouped in the section of Creature Spells. The images look identical to those of Must Obey. This suggests that at some point, there was a creature version of this spell planned. However, at some point, this entire spell was scrapped, and the final game has the function in the form of a hand action.

Time Bomb is a Keeper Spell. It still exists in the game's code, and can be added to maps or researched if the files are edited to do so. A spellbook is also created as normal, labelled Time Bomb, but has the graphic for Conceal Monster. It cannot be used in-game, as there is no slot for it due to all 16 slots being used for the standard spells already.

In an interview Simon Carter, the lead programmer of the game, says that:

How this would've worked in-game is unknown. Reasons why it was cut could include it being seen as offensive, or just it making the game unbalanced by making Imps more powerful.

On certain levels, you would receive a fax if you had a printer plugged in. This was done by the PRINT level script command, but it was removed by the final build. These messages were actually mistaken for genuine death threats, which is likely why this feature was cut.

However, evidence of it remains in some level script files:

You can find a hidden greeting by starting the game with the command parameter -alex. While playing, press and hold down both Shift keys and type JLW.

For another hidden greeting message, hold Left Shift and type one of the following codes and you will get a message from the developers until you release the Shift key.

A long developer message from programmer Jonty Barnes can be seen by sacrificing more than 16 chickens in a Temple, then hovering your cursor over the Chicken spell.

The script for Level 11, Hearth, contains another hidden developer message from Shintaro Kanaoya (as a comment):

The official editor's executable file contains an exclusive Easter Egg. You can activate it by starting with the command parameter -mark. After loading the editor, press and hold down Left Shift and type CROW, revealing the following message:

There are some unusual messages (likely left over from development) in the executable file that are not seen in the game:

There are also variations on the first one, with other types of thing (object, shot, etc) in the place of 'creature'.

These objectives (found in TEXT.DAT) indicate that there was once a level that involved killing Bile Demons with Boulder Traps, but there is no such level in the final game and these texts are not seen anywhere else either. However, the level is present in the 21 May 1997 prototype, so these texts were almost certainly meant for that level.

This tooltip was presumably meant for reinforced walls that have been partially dug or damaged by a creature. This is also a discrete slab type from the other walls. However, walls do not change to this type when they take damage, nor can they be repaired.

An admission that the Illumination spell isn't used.

There are 16 files in the KEEPER\LEVELS directory with the pattern MAPxxxxx.DOC. These are Microsoft Word 6.0 documents, each identical and containing a generic description of one of the levels.


Dig out of a dead end tunnel to find a T - junction in inpenetrable rock. The left cave leads to a semi-excavated gold mine. To the right lies a medium sized underground lake. 2 Tunnelers dig in from this side. A total of 4 Heros come in - 2 Thieves and 1 Archer with the Knight.

These were all last modified on 18 August 1996, about 10 months before the game was released, and the incompleteness of these files suggests that the idea was quickly abandoned.

The document is riddled with spelling errors, but there are tables marking which creatures are available (missing are the Orc and Tentacle (the Orc came towards the end of development)), which new magical items (mentioned are POWER POLYMORPH (possibly an early name for the Chicken spell) and POWER TECTONIC (possibly Destroy Walls or Cave-In)) are available, and which new rooms are available. Each row has the related entry and seven additional columns ranging from 0 to 6. Only Fly 0 and Bug 0 are marked. A stray "Player Good" has Archer, Tunneller, and Thief underneath. The document has Secret Areas, with nothing underneath it.

Tabs are found after "cave leads to" and "2 Tunnelers", which may only be noticed if using a program that converts word documents into a different format.

In the LDATA folder, there is an unused cutscene (drag.smk) of the Lord of the Land being dragged to the bonus torture room.

FANFARE3.WAV (This was presumably meant for the Call To Arms spell.)

'Master, I sense the presence of the Avatar!'

'What trickery is this?! The Avatar's body has vanished!'

'The battle is over.'

'A door design has been discovered.'

'The enemy has taken a door design.'

'You have taken an enemy's door design.'

'You have taken an enemy's spellbook.'

'The enemy has stolen a spellbook!'

'You have taken an enemy's trap design.'

'Your creatures have found a spell.'

'You are victorious! Your darkness pervades throughout the kingdom! All hail the new lord of shadows!'

'You are losing territory.'

'Your creatures have discovered a mysterious magic box.'

'New creatures have joined your dungeon.'

'Your prisoners are starving to death.'

'You may resurrect one creature.'

'Select a creature to take with you to the next realm.'

'A trap design has been discovered.'

'A trap design has been taken from you!'

Hidden in GUIEDIT.DAT (for the level editor that was released afterwards) is this image of a smiley face with blood coming down diagonally. This is possibly a reference to Watchmen.

icons0-0.dat and icons0-1.dat are full of icons, seemingly left over from a much, much earlier build (early 1996, or perhaps even late 1995), as some of these icons can be seen in the late 1995 and early 1996 trailers. A smaller version of the Corporeal Creatures icon is used in this prototype and the final game for Creature messages; the rest seem to go unused.

Most of these are found in ROOM0-0.dat 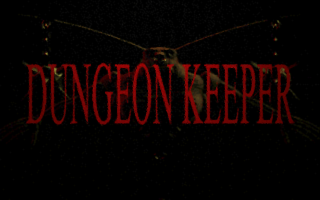 In the DATA directory, there is a file called FRONTEND.RAW and its palette file FRONTEND.PAL. This is a screen that does not appear at any point in the game.

There are actually two versions of the Hand-to-Hand attack: sword and fist. However, for whatever reason, both versions use the sword icon (hand holding a dagger), meaning the fist icon goes unused; the only way to tell which version a creature has is by the sounds it makes when it hits something. The fist icon exists alongside the other abilities' icons in GUI2-0-1.dat. It is not to be confused with the icon used to represent a creature's strength when querying it, which is also a fist.

The player can construct a torture chamber for various enemy or player characters, which have their own unique animations normally. One of these is a tent that rocks back and forth, which the German version uses for all creatures, rather than just some. The German version also removed the gore.

When you try to mark more tiles for digging than you are allowed to, the "Mentor" tells you that you can't give them any more work. However, in the Japanese version, the voice that plays is markedly different: it seems to be the Imps themselves telling you to wait a bit, in a somewhat demanding voice.