Blocksworld was a free to play sandbox game originally made in BoldaiAB before being bought out by Linden Research. As of November of 2019, Blocksworld’s servers have been down indefinitely, and as such new and newly-edited worlds cannot be published; only ones made before the servers went down can be. As of now, nobody can use any of the online features, such as viewing or playing other peoples accounts and worlds, accessing the shop, or editing older worlds, marking the game about 80% defunct as you can still create and play your own new worlds. The PC version does not work anymore...

Hidden deep inside the files are quite a few unused gears.

Three unused G.I. Joe weapons: a bazooka, a grenade, and a sniper rifle. All of these weapons do not function on their own (like other laser guns) and simply act as props.

A motor spindle (circular spinner) and a piston. Interestingly, the piston isn't functional yet has its own commands, meaning it was cut later in development. The motor spindle is functional and works like it is supposed to. 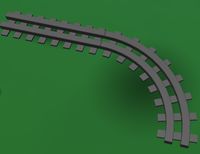 Two train tracks. Both blocks cannot be resized and have no collision.

An early hairdo from the Boldai 2012 build.

Quite a few unused textures can also be found inside the files.

Two textures supposedly for Derpy Hooves go unused, supposedly having been intended for the My Little Pony set.

One Derpy face with female and male variants also go unused. The male one matches the newer design for faces, while the female one looks more like the old design, however the icons for each of them both match the new design.

They are used, but they can’t be bought on normal play. Textures for MuSiCaL (Hairspray reference), Drink Me, Got It?, and a $ Glyph are available, but not normally. 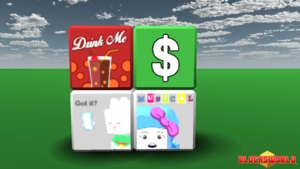