Borderlands 2 is the sequel to space cowboy romp Borderlands, which despite it being crammed full of Internet fandom references to the point of hand wringing embarrassment, is actually a major improvement on the first game. This game, you're now up against Handsome Jack, the megalomaniac head of the Hyperion arms company; as well as the now ubiquitous 'psycho' bandits. 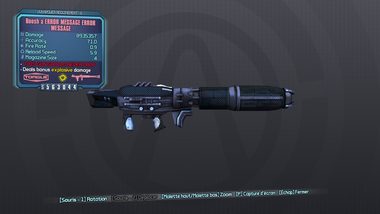 The "ERROR MESSAGE ERROR MESSAGE" is a unique Rocket Launcher manufactured by Torgue included in the first campaign DLC "Captain Scarlett and her Pirate's Booty". This weapon is wielded by the raid boss Master Gee and can't be dropped anywhere in the game making its title and red text unused. Surprisingly, the skin used for this weapon is the same as purple Tediore rocket launchers and unlike all unique rocket launchers in the game, this one can't spawn with a sight. 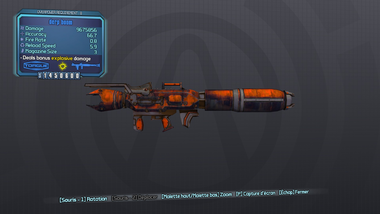 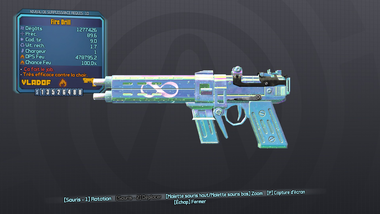 The "Fire Drill" is an unused Effervescent Pistol manufactured by Vladof added in "Commander Lilith and the Fight for Sanctuary" DLC. This weapon is heavily based on the Legendary Infinity Pistol by Vladof. Unlike this weapon however, this one is a Fire exclusive and always comes with 100% Ignite Chance. Despite having a rainbow skin though, this weapon displays as a Legendary in-game. Unfortunately, the "Fire Drill" will disapear from the inventory when loaded in-game due to a lack of Package reference in its weapon Balance Definition. 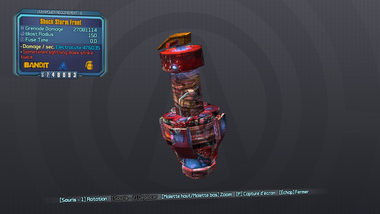 The Mystery of Tannis 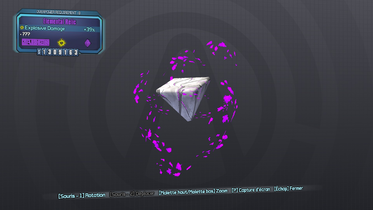 Elemental Relic with The Mystery of Tannis Body Part

"The Mystery of Tannis" is an early Eridian Relic removed from the base game. This relic can't be entirely loaded in-game because only the Body Part of this item still remains. However, some text strings in the game localization files are referring to it.

"The Mystery of Tannis" Body Part

Four new unused items were added with the first headhunter "Bloody Harvest". When used, these items summon a small colored ball following the player and causing elemental damage to nearby enemies. 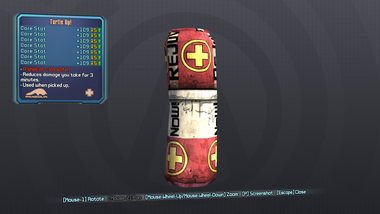 The "Turtle Up!" is an unused power up manufactured by Pangolin and was originally planned to drop like health from enemies. By itself, this item includes unused model, texture, pickup flag icon and pickup sound effect. It's interesting to note that the skin is misplaced on the model and dummy stats are shown on its item card. This item shares the same rarity as Stolen Money from the player by Rat Thieves enemies. 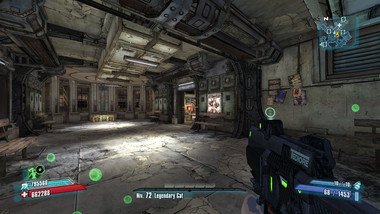 When picked up by the player, the "Turtle Up!" provides a 3 minutes damage reduction bonus displayed with green bubbles on the player's screen. The same bubble particle effect is used during the quest "Clan War: Wakey Wakey" but display brownish bubbles instead of green ones. 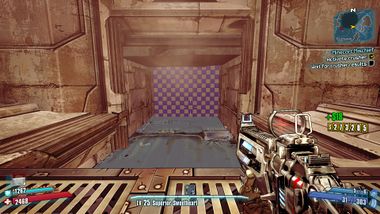 In the "Caustic Caverns", there is a missing texture for the inside of the mine shaft's crusher. The texture is the default checkerboard used by the Unreal Development Kit. 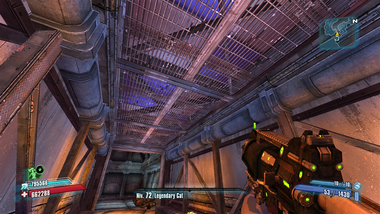 A missing texture can be seen through the grating in "Washburne Refinery" next to Hyperius Arena. The default Unreal Development Kit checkerboard is used as well. 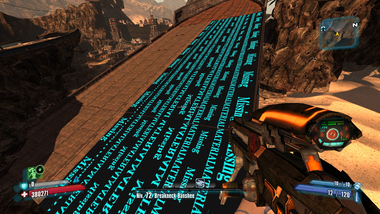 Next to the entrance in "The Rustyards", there is a flashing texture on top of the boat out-of-bounds displaying Missing MATERIAL. This texture can't be seen without glitching/cheating and the default Unreal Development Kit checkerboard isn't used meaning this texture was likely put here on purpose by the developers.

There are no Slag Nova Shield or Slag Spike Shield in Borderlands 2. However, the Shield HUD parameter PrimedFlashFrameName can handle these two shield variants named respectively as nova-amp and spike-amp. 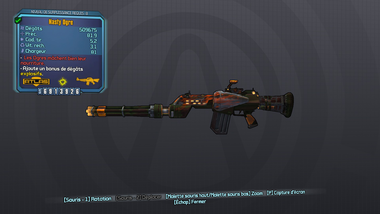 The Atlas company completely disappeared after the events of Borderlands and as such, all weapons and items manufactured by Atlas never returned. However, the company logo can still be displayed in-game by replacing the parameter FlashLabelName of one of the existing manufacturers to atlas.

Interestingly, the Epic Games release of Borderlands 2 on PC comes with the Unreal Editor splash screen. It can be found in Borderlands2/WillowGame/Splash/PC.

The following is the current full currency list for Borderlands 2.

Same as for currencies, placeholder DLC achievements can be found inside WillowGame.Default__AchievementUtility.

Inside the Class FastTravelStationDefinition from the WillowGame Package can be found unused parameters for different Fast Travel Accessibility Times.

Tucked inside of the Borderlands 2/WillowGame/Localization/FaceFXHintText.ini file, there are descriptions for what appears to be all of the spoken dialog in the game and the names of the files that contain them. There are some extra, interestingly descriptive strings inserted for files that contain sound effects instead of dialog.

Depending on the platform you're playing on, the name of the Legendary Sniper Rifle manufactured by Vladof can differ.

Gearbox developers use code name for every released game and content using the following pattern:

Leftover console commands used by developers to debug the game. Most of them can still be used with some game file modification.

Developer Commands mapped to Xbox buttons and only usable by developers.