Borderlands: The Pre-Sequel is (obviously) the interquel between Borderlands and Borderlands 2. This is the first game in the series to take place on Pandora's moon Elpis and to introduce a space mechanic with low gravity and oxygen consumption in addition to the new Cryo element. The story is mainly focused on how Jack became Handsome Jack, the main antagonist of Borderlands 2, and features Dahl as the villains this time. The game also uses the same engine as its predecessor and shares lots of assets from it.

Since the game is built on the Borderlands 2 engine, some leftovers can be found in the game's files. 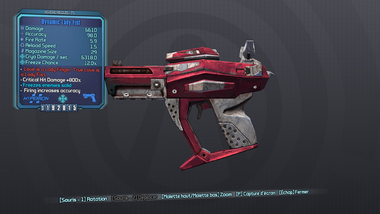 The "Lady Fist" is a unique pistol manufactured by Hyperion. Despite being one of the best weapons in Borderlands 2, this gun never returned in Borderlands: The Pre-Sequel. However, the gun is still present in the game fully functional and can be added in-game using a save editor. 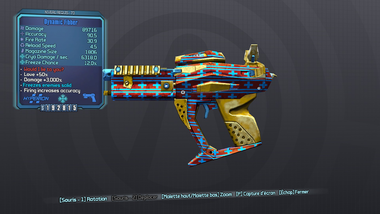 Same as the "Lady Fist", the "Fibber" was planned to return at some point in Borderlands: The Pre-Sequel but remains as an unused weapon. This gun can also be added in the game without any problem including all 3 different barrels by using a save editor. Interestingly, the skin was reworked for this game.

All Moxxi weapons from Borderlands 2 (except the "Rubi" and "Hail") were planned to be released during events such as the "Heart Breaker" for Valentine's Day but sadly never happened. However, Borderlands: The Pre-Sequel fixed the "Bad Touch" and "Good Touch" SMGs rarity by replacing their Body Parts from GD_Weap_SMG.Body.SMG_Body_Maliwan_VarC to GD_Weap_SMG.Body.SMG_Body_Maliwan_VarB making both of them appear as Blue Rarity weapons in-game to match all other Moxxi weapons. This same change has been made for the "Crit" SMG in Borderlands 2 but for some reason those two SMGs never got fixed in that game.

The unused powerup from Borderlands 2 remains still unused in Borderlands: The Pre-Sequel. 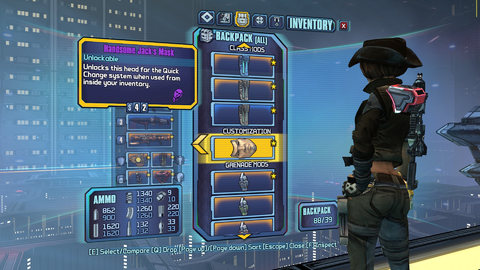 The Handsome Jack's Mask skin obtained at the end of Borderlands 2 can still be acquired using a save editor but serves no purpose at all.

Unused Slag Nova Shield Hud and Slag Spike Shield Hud from Borderlands 2 have been ported in this game but remain still as such.

Same as for Borderlands 2, the Unreal Editor splash screen of Borderlandsː The Pre-Sequel can also be found in the game's files of the Epic Games version of the game. It can be found in BorderlandsThePreSequel/WillowGame/Splash/PC.

Like for Borderlands 2, this game uses placeholder currencies slots for upcoming DLCs but some of them remain unused. Here is the currency list for Borderlands: The Pre-Sequel:

Gearbox developers use code names for every released game and content using the following pattern:

Leftover console commands used by developers to debug the game. Unlike Borderlands 2, some of them have been removed.