This page details bugs of Sonic the Hedgehog (Genesis).

All objects on the title screen (including the trademark and the PRESS START BUTTON text) are misaligned; instead of being dead-center, they are moved 8 pixels to the left of where they should be.

In prerelease screenshots and prototype, the title of Sonic 1 had text that said "PRESS START BUTTON" below the giant emblem. However, the text was accidentally dummied out before the game's release due to a goof by the programmers. The routine for loading the main title screen into memory doesn't fully clear out the memory used for the "SONIC TEAM PRESENTS" text, which prevents the PSB object from appearing. 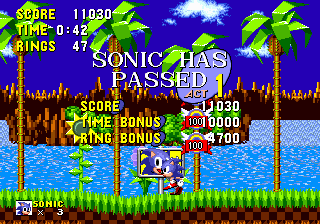 At the end of a level, there are hidden point bonuses around the signpost. Although the 10,000 and 1,000 point bonuses work correctly, the 100 point bonus only gifts 10 points due to a missing zero in the points array (which multiplies the entries by 10).

Both the time and ring counters can flash red; the former when 9 minutes have passed, and the latter when no rings have been collected. However, a bug in the HUD code will prevent the time counter from flashing to red if the player has at least one ring. 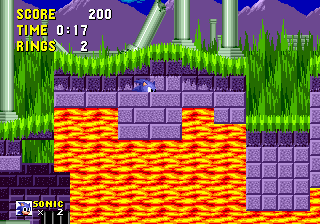 A rather infamous bug, which made its way into both Sonic 2 and Sonic 3. It's possible for Sonic to get stuck in a wall, by debug mode or being pushed by other objects. When that happens, pressing either Left or Right on the D-Pad will force Sonic a distance away from the wall, in an attempt to get him unstuck. This can be used to skip certain parts of a level or, in certain cases, can send Sonic to the very end of a stage. When that happens, there's a chance of random objects and tiles appearing, and the signpost ending up using the sprites used for monitor contents. 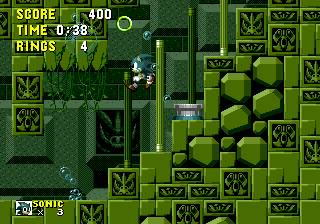 If Sonic is colliding with objects in certain zones (Most noticeable in Marble and Labyrinth, though it can be triggered as early as Green Hill Zone Act 2, through the Rock object with yellow spring on top) and starts jumping, the animation shown will be of him walking instead of his usual rolling/jumping one.

When you drown in a water level and get a game over, the title screen's background will stop moving.

The so-called "spike bug" is perhaps the most infamous bug in the game. While Sonic is usually invulnerable for a brief moment upon being injured (indicated by his sprite flashing), if he lands on spikes, he will be harmed, regardless of whether he is flashing or not. This has the effect of essentially guaranteeing the player's death if they land on a row of spikes, even if equipped with a shield. Unsurprisingly, this behavior has been removed in nearly every rerelease, as well as in Sonic the Hedgehog 2.

Whether this quirk is actually a bug or an intended behavior was a considerable source of debate - the bug is caused by spikes calling a unique routine to hurt Sonic, distinct from the routine used by every other harmful object in the game. However, the prototype confirms that the spike bug is indeed a bug, as, like IceCap Zone's spikes in Sonic the Hedgehog 3, the spikes are coded to not hurt Sonic while invincible instead of using the general hurt routine.

Many, many objects in Sonic 1 often display before initializing. This means the game will crash under certain circumstances (eg: Porting S2/S3K objects to S1). 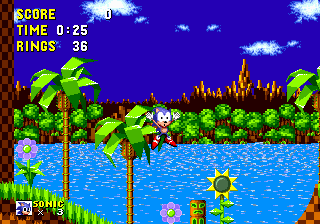 Due to the way the camera is set up in Sonic 1, and the general area of where the bug is located, it's possible to kill Sonic in a certain area of Green Hill Zone Act 1. By jumping straight down while on a loop and then rolling, Sonic will gain enough speed to outrun the camera, resulting in the loss of a life. 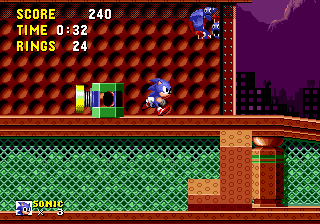 In the pattern load cues for Spring Yard Zone - which load object sprites into the game's memory - is an unused entry for the Caterkiller enemy, which starts at $9FE0. But due to its closeness to the entry for the Roller enemy (starting at $9700), the two sprites clash each other during gameplay, noticeable during the Roller's rolling animation.

The routine that runs pattern load cues in Sonic 1 (and Sonic 2, technically) has an error in it, where an instruction is placed a few lines earlier than it should be. Although normally unnoticeable, it is possible to crash the game with it by rolling at the end of Labyrinth Zone Acts 1 and 2. 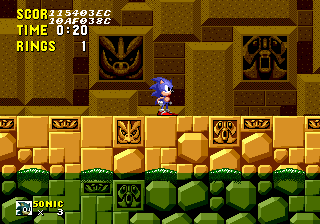 At the end of Labyrinth Zone Act 2, the signpost can be unloaded from memory by heading to the area where the camera locks horizontally, and running all the way to the left. There is no way to exit this screen without resetting or turning off the console; jumping into a Giant Ring will not transport Sonic to a Special Stage, and the timer, when it runs out, will not kill off Sonic. 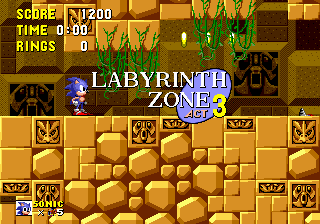 The glitch pulled off successfully. Note the strange-looking lives counter.

It's possible, through careful timing in Labyrinth Zone Act 3, to change Sonic's lives from 1 to 255 in the section with the current and breakable poles. By positioning Sonic in front of some spikes, and letting his drown countdown run out, Sonic will drown and suddenly fly right into the spikes, causing him to lose two lives at once. This will roll his lives counter back to (a glitchy) 255.

If you jump into a Orbinaut at around three quarters into Act 1 on the upper path, Sonic will die when he hits the top of the screen.

Very similar in outcome to the Lives Underflow glitch. During the fight with Robotnik in Final Zone, his 'death' animation shows his exploding crusher sinking into the ground, slowly. It's possible, with quick timing on the eighth and final hit, to hit Robotnik a second time, rolling his health over to 255. This makes it impossible to defeat Robotnik, and the only way to turn his health back to normal is to lose a life.

Fall off Level at Final Boss

If the player carefully times a jump after the final boss, it's possible to fall into the pit.

If the game is paused while the music fades back in, the percussion track (DAC) will not play.