This page details bugs of The Fantastic Adventures of Dizzy.

One of the game's quests involves freeing Denzil from an ice cube, using straw and a match to light a fire. However, in the Blue version, you can start the fire anywhere except the very top of a screen (even underwater), causing you to lose both items and thus requiring you to restart the game. This game-breaking oversight was somewhat remedied in the Red revisions, where these items only activate when used inside Denzil's hut, although it is still possible to waste them by using them in a part of the hut too far away from the block of ice you're trying to melt.

A little-known feature is that the rate at which Dizzy takes damage from wading underwater without the Aqua-Lung depends on how many times he has died by drowning already, as if he gets better at holding his breath from the experience. Each of the first 3 drowning deaths halves the rate of water damage afterward, leaving Dizzy at 1/8th of his original drowning speed... until he drowns another 5 times. By accumulating enough extra lives from Theodore's puzzles to drown Dizzy for the 8th time, the drown counter (located at $03C0 in the Blue version or $03D9 in the Red versions) gets reset to 0 due to the game only preserving its lower 3 bits, and Dizzy reverts to his original fastest drowning speed. Acquiring even more lives (such as from the European version's extra starting life or the Red versions' cheat code) will allow the pattern to repeat as the 9th drowning death cuts the water damage rate by half and the 10th drops it to a quarter of the original again. 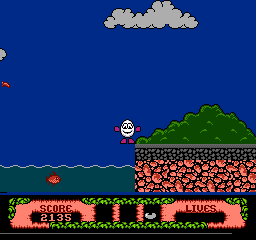 If you let go off the directional button while walking in the right moment, it's possible to fall straight down from the ledge - typically you can only fall at an angle. Oddly enough, if you do that in the far left end of the Dock street Dizzy will fall through the water (under normal circumstances water kills you), and eventually reappear from the top of the screen, looping endlessly. You can still place items in mid-air and be harmed by birds, but you can't be killed nor can you move - the only way out is to reset the game.

This bug was actually introduced in the Red revision of the game - it was not present in the original Blue version (that is, you can't fall straight down in this release). This is because in the Blue version Dizzy walks much slower, and stops in place when you stop holding the d-pad. In the Red revision Dizzy "brakes" for a brief moment, and if you time it just right he can stop in mid-air. 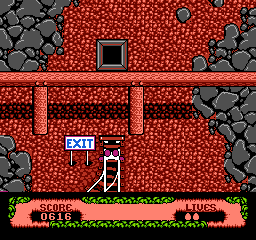 Just before the final exit of the minecart ride is one last hurdle between junctions that's supposed to kill Dizzy on impact, but if you hit it while you have the cart pulled back to the very bottom of the screen, Dizzy will sink through the track after he's thrown out and emerge from the space under the stairs at the west end of Bridge Street as though he had successfully landed on the exit hole. Best of all, in the Red versions, Dizzy still collects the final star! 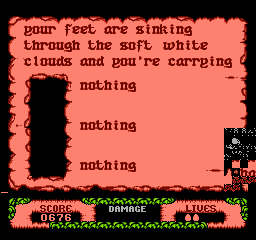 After the portcullis to Zaks' castle has been opened, the screen brought up by Select at the exterior of the cloud castle displays garbage tiles around its right side.

Getting hit by a butterfly doesn't just reverse Dizzy's controls; it reverses the momentum he gets from other things that push him around. For one thing, it becomes quite difficult to use the rope correctly in this state when Dizzy will jump away from the direction he is swinging. The game also features a few guard-type characters who will damage and push Dizzy back a bit until he can get them to leave by placating them with the correct item, and the effect of the butterfly-inflicted backward status on these guards' knockback can vary with the character and the version of the game. 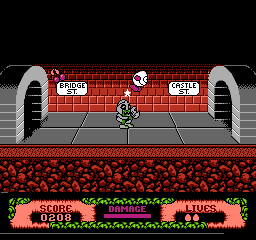 While restoring your health or taking damage, hit Select to open the inventory, then again to return to the game. Certain hazards (most notably spiders) will no longer hurt you. This effect lasts until you touch another hazard that does hurt you.

This bug stems from the fact that Dizzy actually has two damage counters: the one that's used internally, and the one that's used by the visual damage indicator. Hitting Select while the damage bar is lowering/rising causes these two values to go out of sync, which in turn breaks hit detection logic for some entities: ants, mice, crabs, spiders, water droplets, fish and guillotines.

See this video to learn what happens and why in more detail.

When playing on a PAL console, the music temporarily speeds up during screen transitions. This affects all game revisions, though it's most noticeable in both Red versions. This bug does not occur on NTSC machines on any revision.

You can pick up items instantaneously if you do it while jumping/rolling, which saves a lot of time. If you have full inventory, the exchanged item is placed where the Dizzy's sprite is positioned, even in mid-air. This (and the fact you can do this trick only in the NES versions of the game) strongly suggests it's a developer oversight.

With that said, the developers might have been aware of the issue, as in the Blue revision the pickaxe (placed on a ledge near a waterfall) is floating above the ground, just barely out of Dizzy's reach when jumping from below. In the Red versions this area is slightly remodeled, and the ledges are made higher.

In all game revisions, the inventory entry viewed on Castle Street misspells the word shopkeeper.