Bugsnax is a game all about catching Bugsnax and feeding them to Grumpuses. Kero Kero Bonito made a song for it!

Rock - "A chunk of rock just small enough to be picked up."
Toilet Paper - "A roll of disposable cloth used to clean the nether regions."
Locked Beach Door - "This locked door is blocking the way to the rest of the beach. There's no way to get it open right now..."
Fossil Trap - "Triffany will use this to smoosh Bugsnax."
Clumby - "But a big plate of lasagna will make her day!" spoken by Lizbert
Fossil Trap - "It's time for you to go extinct don'tchaknow!"
Honey - "So sweet yet so sticky!"
Sauce Slinger - "It slings sauces!" - spoken by Wambus
Snaxscope - "A clear picture of your surroundings!" - spoken by Clumby

The game has a few unused audio files left in its sound banks.

There is an alternate version of Wiggle's "Bugsnax Queen" song. Unlike in the final version, the dialogue is not sung.

GameAudio_BugVoices.bank includes some temporary placeholder sounds, presumably used in development for bugs that had no lines yet. 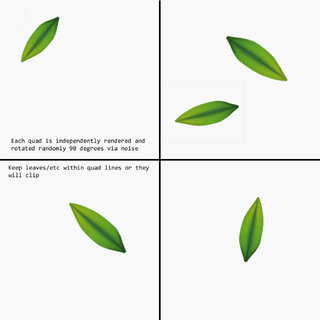 Removing the alpha channel on "Content/FX/Leaves3.dds" reveals some notes left by the developers.

Developer Megan Varde on Twitter revealed that there is a hidden image inside Beffica's locket, showing some happy fries. The texture is part of her hair file.

Textures have been found for the unused Lures, which were replaced by sauces.

The game has many different tools that didn't make the cut, many of which either have models left in the game or have their (non-functional) entities placed in a map.

Balloon - It's not clear what this would have done in the context of a tool. The model and textures are present but not much else.

Cannon - Has a model but doesn't seem to have any accompanying textures. The entity for is referenced in the "RealFakeLevel" test map but nothing spawns. No way at all to tell how it would have functioned.

Drone - Another tool that only seems to be left as non-functioning entity in the "RealFakeLevel" test map. It's possible that this tool was recycled into the drone used in the game's finale.

Hose - Irrlicht scene file is still present. It is derived from the slingshot's scene and seems like it could have acted as something of an upgrade to the slingshot. Doesn't seem to have a model.

Lures - Lures come in different flavours - Fruity, Meaty, Salt, Sugary and Super - they likely worked similar to sauce in attracting certain bugs but would have probably been physics objects instead of splatting on stuff like sauce does. Remnants of them remain in various places. Their models and textures are still present and some of the game's XML files still refer to them, but unfortunately no definition files or Irrlicht scenes seem to have survived, except for the base scene named "Lure_Base".

Snak Motel - Irrlicht scene file is still present. Derived from the SnapTrap and is made out of SnapTrap components. Not entirely clear how it would have worked differently to the SnapTrap but based on the scene file it may have been intended to work with lures.

Rock - Classified as a lure internally. You can pick it up but it isn't accessible in any way afterwards. The Irrlicht scene and definition files are still present but given the removal of the lures system it's not clear if there's still any way to re-add the ability to use it after picking it up.

Honey - A cut sauce. Model, definition file and icons are all still present, though unfortunately it isn't useable after being picked up. Its model still appears in various places in the game as a non-interactive environmental prop.

The game has a map simply named "Test", likely used for various things over the course of development. On loading the map, you'll be given access to all tools. The Buggy Ball, Lunchpad, Snak Trap and Trip Shot can be found off to the left. Near them are two cubes, one blue and one orange. In the centre of the map is Beffica. A lone Strabby is trapped in a small box and off to the side you can find one of every sauce in the game barring super sauce.

Examination of the map file reveals that a Pinkle is present on the map, albeit disabled. If re-enabled, it will spawn on the right "wall" then wander in a small circle in the top left of the map. 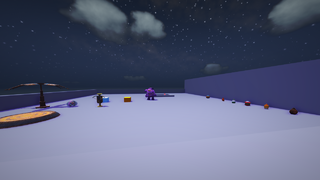 This map is structurally similar to the "Test" map, though it only contains the Buggy Ball and a rock.

While it may not seem interesting, examination of the map's file reveals that it's intended to contain a whole host of tools that were cut from the game including a drone, a cannon and lures. The only remnant of this that still spawns is the rock, which is actually a lure. Unlike other grabbable objects in the game, picking up the rock doesn't allow you to hold it in your hands and throw it around, instead it seems to end up stored in your inventory and becomes unusable with no way to see or access it. 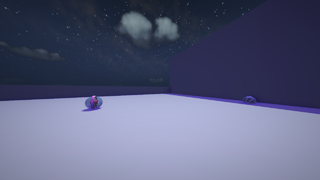 This map contains a ton of models, including various Bugsnax as well as some environmental props. The Snakgrappler spawns, but can't be collected or selected in the gadget wheel. The Snak Trap is also loaded but can't be seen except for its shadow. It doesn't show up in the gadget menu either. Even the Journal can't be opened in this map. The Bugsnax cycle through all their animations, and cannot be caught as they're just models rather than the actual entities. 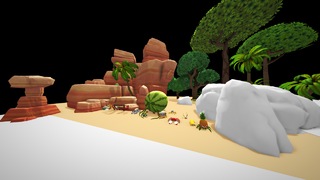 The "NavMesh" folder contains some navmesh data for levels that don't have any other data in the files.

While there's no way to view these navmeshes, their names suggest these were likely demo maps used to either test specific bug types or show them off somewhere.

Additionally, map-specific options will be shown at the bottom of the list if the current map has any. These are usually used to debug quests. 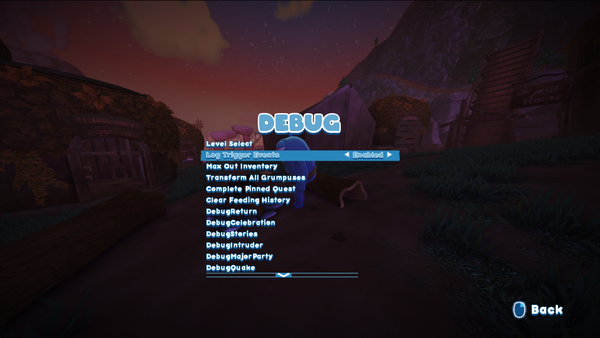 Level Select opens a file browser that defaults to showing the Content/Levels directory. This directory contains all the scenes in the game (which includes both entity prefabs as well as the game's levels, due to how the Irrlicht engine works). 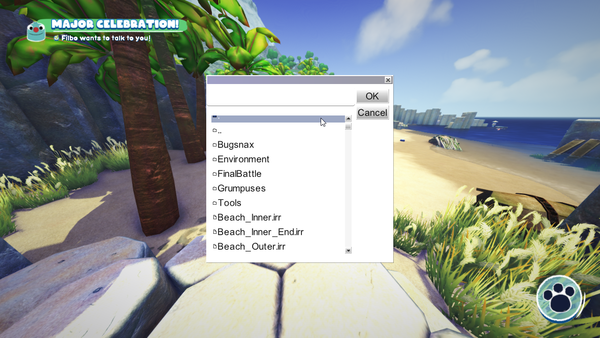 Max Out Inventory does exactly as it says, Filling the players inventory with 99x of every bugsnax in the game. 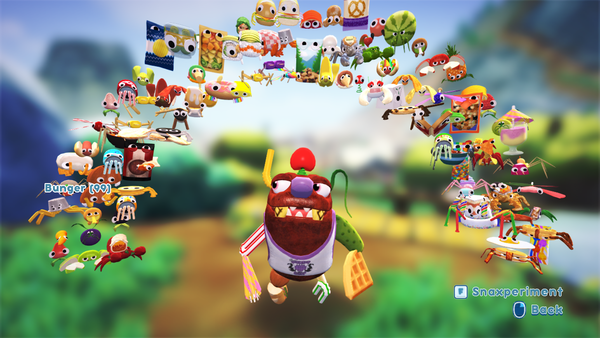 The file "Content/Definitions/VariableDecay.xml" is used to define variables that should decrease over time. It contains commented out definitions for each character's "fullness", suggesting that at some point you'd have needed to actually keep characters fed. The final game has no such requirement.

The file also contains a variable related to lures, however as lures were removed from the game it likely no longer serves a purpose, which would make this entire file obsolete.

While the game does not currently ship with an editor, the game's files contain various assets for one. This includes some transparent solid colours used to indicate things such as triggers, some simple shape models and icons for things such as checkpoints, objectives and sound/light sources. Most of these assets, including a "browse workshop" button, seem to be leftovers from Octodad.

The file "Content/Config/PlayerStatus.xml" is a leftover from the developer's previous game, "Octodad: Dadliest Catch". It defines various character "suspicion" types that are normally used to penalise the player in that game. Needless to say, it serves no purpose in Bugsnax.