Croc: Legend of the Gobbos (Windows)

Some of the sub-maps have their own names. Since you only see the level title from the map, these additional titles go unused.

Many of these names are leftovers from previous game versions, such as the Tech Demo, and don't seem to match up with the map in question. Some are also used more than once and across multiple levels. 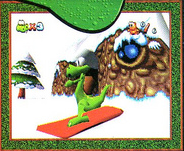 As seen in some early screenshots, Croc was going to feature at least one snowboarding level. Although this was dropped, much like the levels the model for the snowboard remains in the game data. However, it is never loaded in any level.

Seen in Fan Test, these fans/vents are hazardous to Croc.

In Water Dantini Test, there are some red fish that don't appear anywhere else.

SEEDTEST.MAP contains this blue bag which can be picked up. It doesn't do anything, but it restored a life in an earlier demo. Also, Beany Bird appears and briefly follows Croc for no reason.

SEEDTEST.MAP also contains this yellow bag which also used to restore lives in the Tech Demo. Like the blue bag, picking it up does nothing.

WHALE.MAP has a whale stuffed halfway into the grass. Although you can't interact with it per se, moving around in it can sometimes trigger a warp effect. It's possible that this may have been used in a similar fashion to the whale found in Spyro: Year of the Dragon. It's worth noting that a submap just before the Neptuna boss is titled "Whale last section". 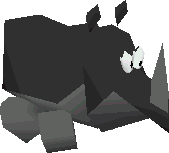 A rhinoceros that is seen in a prototype. He has a few different animations - two types of running, and one just like in the prototype, where he follows Croc and then circles above him. There is also another strange animation where he follows Croc around when he's near, but when Croc runs too far ahead, he floats out of the level through any solid object.

Some unused enemies can be found in the unused levels.

A brown monkey enemy, found in funkymonkey that goes by the internal name FunkyMonkey as well. It walks forward with arms in the air as though it's supposed to be carrying something. After a while, it will lower its arms and sit down before vanishing.

This little whelk can be found in Water Dantini Test. It's your basic walking enemy.

A red Jumpy enemy. It is similar to the Fire breathing Jumpy, only it is red instead of orange and does not shoot any fireballs.

In addition to these, there are several other enemies that the game attempts to load but cannot due to missing files. Some of these can be seen in earlier builds of the game.

sounds.wad contains all of the game's sound effects, including several that are unused in the final game.

There are textures in the game that are leftovers from other versions of the game. Namely, textures from the PlayStation and Sega Saturn versions have been left in.

GOAT1.ANI and CATP.ANI contain animations for some enemies that were seen in earlier versions of the game. However, their models are now absent.

In the early prototype, there is an early unfinished intro cutscene that showcases Croc's moves like swimming, stomping and attacking in a storybook style. The files still exist, but the data does not load.

When you lose, Croc walks across a dark forest area with a well in the background. It seems as though this background was originally going to change based on what world you were located in. The Ice and Castle screens are fully functional, but the Desert screen's camera is in the wrong place. To get them working, locate MP084_00.MAP in the Map.idx file and replace the remaining line with the format listed.

There are two demos which are never used, both requiring an unused level. The first uses Nice & Easy, but Croc does nothing. The second uses Default New Map (MAP4), where Croc runs forward for a bit, leaps once and halts all movement (right over a hazard spot).