Cyberpunk 2077 is a highly-ambitious open-world game that CDPR took its time developing, wanting to take as much time as needed in order to finish it...except not really. It was revealed by devs that worked on the game that upper management had enforced crunch periods since May 2019 to get the game made in a short timespan, with the developers initially learning of the delays on Twitter.

The end result was broken promises, a buggy experience on all platforms (especially PS4 and Xbox One, which were so bad Microsoft and Sony encouraged refunds, and the latter refused to sell digital versions of the game for five months after launch), a lot of overworked and underpaid developers, and one hell of an alienated audience. Talk about burning bridges at both ends.

In essence: This is a cautionary tale of what happens when corporate hubris and crunch periods collide. 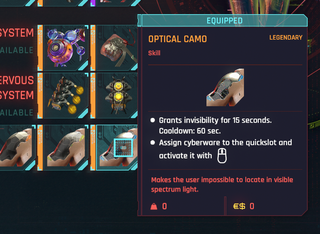 A piece of cyberware meant to grant the player invisibility for 5-15 seconds depending on the rarity. If re-enabled in-game, it shows up properly in the cyberware screen, though it appears to be a gamble on whether or not it will actually function.

It's still mentioned by the Aldecaldos ripper doc.

Male V has voice lines that pertain to the Judy romance, which are normally exclusive to female V. According to CDPR, this is because all of V's dialogue, regardless of whether it was intended for male or female V, was recorded by both voice actors to "avoid missing something by mistake that would require future recordings."