The poster child for 6DOF combat got a console port a year after its PC debut, introducing coloured lighting effects, a remixed soundtrack from the Mac version, some additional exclusive multiplayer maps, and some deliciously cheesy pre-rendered FMV sequences. 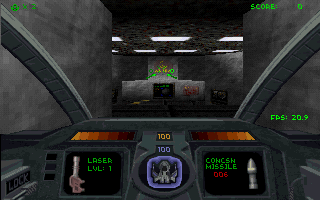 Use the following code to display a FPS counter.

Each level has its own texture set, stored in a .pst file. The .pst file includes a table mapping Descent's texture ids to regions of the Playstation's VRAM, as well as including blocks of graphical data to load into VRAM. Most .pst files have some garbage data and a few unused textures left over from other levels, but all of the .pst files have the following unused graphics.

The error texture is present, but never normally appears.

The cut afterburner gauge is also packed in, as unused as ever.

descent.tex is the game's main text repository file, and can be found within DESCENT.HOG. Within it, there are several unused strings:

The title screen in the Japanese version is slightly brighter compared to the American and European releases. Additionally, there's no copyright text in the main menu.

The European release fixes a typo in the fifth Total Chaos stage's name.