Descent II is the sequel to Descent, improving on the original with more weapons, themed levels, and super fast thief robots.

Descent 2 has 6 separate graphic sets, with different palettes for each of the planets visited in the game. All graphics below are shown with the set used by the first four levels, set in the Zeta Aquilae system, but exist in the other 5 palettes as well.

The unused blue blob from Descent returns, now also defined as the Gauss projectile's sprite. As with the Vulcan projectile, it isn't rendered in-game.

As does the blue energy ball.

The slime is present, too, suffering heavily from the change in palettes.

And the landing pad.

The monitors from Descent 1 displaying the Spider Processor robot are present but not used in Descent 2. If they are used in a custom level, when broken they will use the graphics of another screen with the corners cut off, ruining the effect.

These three graphics go unused, all of them are set to scroll at a diagonal at a slow pace.

Unused doors, all of which are from Descent 1.

A large amount of rocks, most of which are from Descent 1, are not used in any of the game's levels.

All robots from the original Descent remain, but most are not used in the Descent II levels. The Supervisor appears a few times in the Quartzon levels, with some upgraded behavior. Level 16 has a number of materialization centers that create the original cloaked lifter robot, but the rest go unused.

Included in the new robots for Descent II is a clone of the original Descent level 7 boss, with some slight stat differences. Its boss-like properties are removed, so it can't teleport and won't cause the countdown on death, it has 5000 HP instead of 4000, and causes a small amount of splash damage on death.

An unused robot with a green version of the original Descent's Heavy Driller model. It fires multiple homing missiles as its attack, like the Lou Guard enemy.

A green-colored Guidebot. Unlike the normal Guidebot, this robot is hostile and attempts to make suicide explosion attacks like the Omega Defense Spawn enemy.

The data for the Omega Defense Spawn, Smelter, BPER, Spider, and Spawn enemies is duplicated in the data files.

The Omega Defense Spawn duplicate gives 500 points vs. the normal's 400, has 70 health instead of the normal's 90, and plays the sounds of the Sidearm Modula enemy.

The BPER duplicate gives 800 points vs the normal's 700, has 85 health instead of the normal's 75, and makes the sound of the original Descent's Defense Prototype.

The Spawn duplicate gives 300 points vs. the normal's 200, attacks more frequently, and makes the sound of the original Descent's baby spider.

All of the weapons from the original Descent remain. The blue energy ball remains unused, as does the silent Spreadfire blob, and weapon #8 remains uninitialized. None of the new Descent 2 robots use the Class 1 Drone and Spider Processor's energy balls, so those are effectively unused. 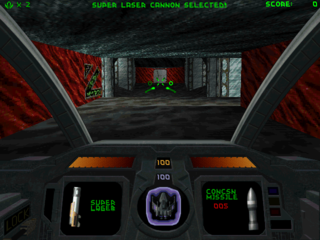 In Descent 2, to fit the new weapons, all of the weapon keys were changed to alternate between selecting two weapons, excepting the Laser Cannon, where the new weapon simply upgrades your normal laser to level 5 and beyond. However, a secondary weapon is still defined for the laser slot, also identified as the "Super Laser". It is hardcoded to only fire Laser level 4 projectiles regardless of your current laser level, and the name shows up overlapping the level in the UI. In the full-screen HUD, it doesn't show its name at all.

The sound played when an illusionary wall is set to fade out. In the release levels, only solid walls or forcefields are set to fade out, so this goes unused.

In addition, a large number of the robot sounds from the original Descent remain, but are unused in any of the release levels. Supervisors make a return in a few levels, and the original Descent cloaked lifter is created by materialization centers in the Limefrost Spiral boss level, and their sounds are also used by the Sidearm and their smaller Modula. Some of these sounds may have been used for early versions of the Descent 2 robots, given the use in the duplicate robots listed above.