The game that tried its hardest to be better than Doom and to kickstart the six degrees of freedom FPS genre, with at best modest success.

The public source code release from 1998 contains support for an unreleased arcade version of Descent, dating to September 1994. It would have operated on a timer (hardcoded for 2 minutes per credit) rather than the PC's lives system and only supported joystick input. It does not appear to have been updated past early 1995.

The Afterburner from Descent 2 was originally planned to be in Descent 1, but didn't make the cut. A single unused gauge graphic remains from it, which doesn't fit the Descent 2 cockpit, but does seem to fit in this image

Graphics for the hostage faces, as specified in the text section, are present in the Mac data files, but still remain unused in-game.

An unused blue version of the Class 1 Drone blob.

Another unused blob. Internally defined as the Vulcan Cannon projectile's sprite, but is not rendered in-game.

Several frames exist for what looks like a breakable wall version of the default light gray rock texture, called rock001 (as seen in the first level). It is defined to be breakable like a hostage door, and it explodes when fully destroyed. Could possibly be an early way of hiding secrets, before the secret doors were added.

An unused monitor texture that appears to be telling the player to beat it.

A variant of the used sign to mark energy centers, but with a wrench instead of a lightning bolt. Potentially used for the scrapped repair centers. A used door texture uses this sign.

A pair of damaged signs that go unused.

A gray version of the energy center grid texture.

An animation of what appears to be slime or acid. When used in a level, it can be safely touched without causing damage unlike the used lava.

This palette-cycling lava is defined as a mine texture, but isn't used ever. It is used as a robot texture in the third secret level, however.

What appears to be a quarter of a landing pad graphic.

A small number of rock and metal graphics go unused.

The Split Pod (also sometimes called the red triangle) has a very basic model, consisting of a single tetrahedron that has a single solid glowing red texture. If placed into a level, it mainly floats around, occasionally charging into, circling around and chasing players, and is worth 100 points when killed. Crashing into them only yields the standard contact damage, so they're mostly harmless. They won't drop anything except if specified to and only have a single sound effect that is shared with Medium Lifters. Some custom levels use them as mine-laying robots (similar to Gophers), and in this mode they move around fast. Based on the model, behavior and its lack of sound effects, it could be an early testing enemy. The robot's weapon has been set to blue lasers, but the model has no guns to fire it, so they'll never shoot.

Included in Descent v1.0 is the model of the scrapped "Splitter" enemy, a green ball with glowing red patches. Only the model remains, no stats or AI data are included for the robot. The texture the model file references also isn't present, but is later used in Descent 2.

An early robot model present in the Descent source code, called "Pig" in the source code. Can be seen briefly in this early footage.

Another early robot model present in the source code, however, its textures are missing. A checkerboard texture is used to visualize how the texture would be applied.

A large robot model with four guns from the source code, also briefly visible in the early footage, along with the unused "slime" texture.

An early version of the Class 1 Drone model, also with missing textures. A number of them are visible in this early clip.

All projectiles are defined in a table, and a few entries go unused.

None of the sprites referenced for these powerups exist, and even if they are modified to have sprites, they can't be picked up due to their pickup routines being removed in the game's code. 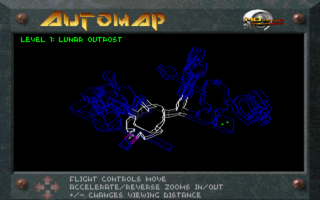 This powerup would reveal the full map, the same as the map powerup that made its way into Descent 2. The reveal map effect is fully functional, and can be demonstrated by adding 64 to the 32 bit integer at #13D9 in a Descent v1.5 savegame. Like the Descent 2 version, unvisited areas are shown in blue.

This powerup was the afterburner. The afterburner was fully implemented, but scrapped at some point before release, with most of its code still present but commented out. The actual extra thrust effect was never commented, however, and can be enabled by adding 4096 to the 32 bit integer at #13D9 in a Descent v1.5 savegame. This will cause the player to always move forward at full speed, as if the cruise was set to max, but in addition, the player can also use the normal flight controls to add to this forward thrust, allowing for doubled forward speed. The source shows that this afterburner would be activated by holding SHIFT and A, and it stores enough energy for five seconds of thrust.

This powerup would be a headlight. No code for this powerup exists, but the player does always cast a faint light, identified as the "headlight" in the source code.

This powerup would give the player all weapons, full shields and energy, and a stock of missiles. Curiously, while all the other powerup pickup routines have been removed, this powerup's routine remains, but it is only enabled in debug builds. It is set to give 50 concussion missiles, 50 homing missiles, 50 proximity bombs, 10 smart missiles, and 10 mega missiles.

Located at the end of BRIEFING.TXB, likely placeholders.

Included in version 1.0's BITMAPS.BIN file are some definitions for hostage faces that aren't used. These definitions are removed in all later releases of the game. 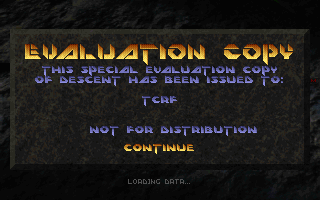 Marker text present in the executable. These are used to mark locations to stamp the executable to create a time limited evaluation copy for specific users. The text itself isn't important to the feature, and is taken from the Divine Comedy. The first string marks the location the name checksum is stored, the second string marks where the name is placed, and the third string marks when the copy expires and can't be played.

A second robot tearing sound, formerly used by the cloaked lifters and Advanced Lifters in the shareware version. These robots would have their claw sounds replaced with their sight sounds in the registered version for some reason.

Unused sounds for enemy robots that are based on the ominous sound emitted by missile-firing Hulks. The first three are shorter versions of the used sounds, but the last two are drastically different.

Unused sounds for the boss robots. The BITMAPS.TBL file used by the editor, as released with the game's source indicates the original intended purposes of them.