Spotted in a graphics file within internal material for Super Mario World 2: Yoshi's Island, an early Fire Flower sprite is present, coincidentally based on a similar flower seen in one of the original game artwork.

In the z-mario-4 folder, a scratchpad of Luigi sprites seen in Super Mario All-Stars + Super Mario World is present, featuring different sprites for turning, kicking, sliding, falling after a jump and the pose when you finish a level . This sheet seems to contain a sprite of small Luigi giving a thumbs up, although it looks more like he's flipping the bird. This sprite was scrapped and changed for the crossed arm pose in the final, likely due to the middle finger resemblance.

Content related to Super Mario All-Stars were discovered in the 7/25/2020 leak, including two .asm files that mention "Super Mario CD" and "Super Mario Zanmai", suggesting that those were early titles for the game. They can be found in "mn_hp_smend1.asm" and "mn_mario_main.asm", respectively. The name "Super Mario CD" seems to imply the game might have been initially conceived as a game for Nintendo and Sony's planned CD add-on for the Super Nintendo before, you know, that happened. That name may have also been scrapped to avoid any similarities with Sonic CD, which released the same year as Super Mario All-Stars.

The graphics for the early file select screen were found, along with its palettes and a map: 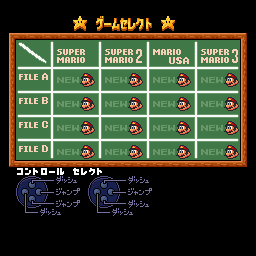