The first game in the make-your-shmup Dezaemon series. 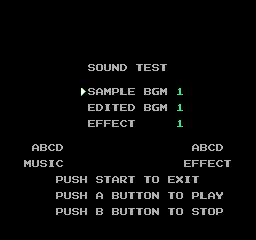 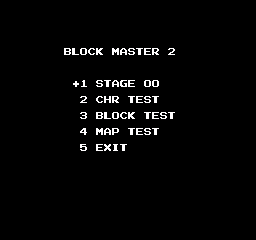 While in the above sound test, press Select + Start once more to end up in a menu with various graphics tests, including a CHR viewer.

An unused or unfinished animation routine can be found in the final version of this game. It looks like some kind of tech-demo of possibly a real-time zooming of the CHR data, since there is no small CHR data used for graphics. To see this animation, use the Game Genie code XVUSVPAV and reset the console.

There are some unused debug routines, meant to be called from in-game mode with joypad buttons, left in the final release of this game. Since there are no fonts left in sample mode nor in editor mode, you need to write it from scratch or you can at least see them using some tricks. For example, using the Game Genie codes PESKPIYE + UKSKZIVG you can see this particular menu in the Graphics Test menu. Press Select to cycle between various displaying variables: general game values and sound channel data. 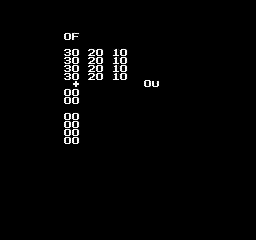 Others can be re-enabled in the same way, but have some issues being displayed, so I (Cah4e3) just hacked it in the debug to be displayed. Anyway, this screen was meant to be displayed during game play using sprites, just the same as the previous debug output.

Finally, there is a weapon cheat left, which can be easily re-enabled in-game by using the code XTKIAGAV. During the game press Select to cycle through weapons and press A to increase the current weapon power.