Kaite Tsukutte Asoberu Dezaemon is the Super Famicom follow-up to Dezaemon, a "create-your-own-shmup" utility which also includes a sequel to Athena's earlier arcade game Daioh as a built-in sample game. An enhanced version was released for the PlayStation as Dezaemon Plus.

Dezaemon has a flag which enables some cool hidden stuff. To enable it, do a soft reset after the game has fully booted. Once the Athena jingle starts to play, press B, A, X, Y, L, R, and you should hear a sound. Once done correctly, you can access a menu full of messages from the developers as well as a hidden feature in the music editor. 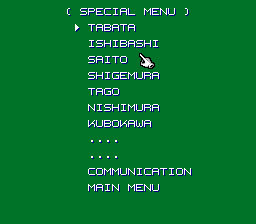 After enabling the secret flag, move the cursor over the Dezaemon logo on the title screen, then hold A and press B (or hold the right button and press the left button, if you're using the mouse) to access this menu.

"Communication" shows some basic info about the controllers/peripherals plugged in to both controller ports. The other options show various messages from some of the development team.

The assembly code listed in this message as "Secret 1" is located in the ROM at CPU address $80DD4B (file offset $005D4B), and is the routine responsible for sending/receiving bytes via the cable/software combo mentioned in "Secret 3".

If this device is actually present, selecting "Communication" on the Special Menu will replace the normal controller display with "communication mode", which calls code at $80DC67 to start a communication protocol. This allows the device to do any of the following things:

The description of "Secret 3" mentions that this is mostly useful for managing save game data, but nowadays this can also be done easily using a backup device of some kind (or by just running the game in an emulator instead).

The address listing that comes afterward in the message (as "Secret 2") describes the layout of the cartridge's SRAM containing all user-made game content. 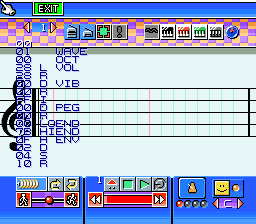 The other feature enabled by the secret flag is the ability to edit the instruments provided by the music editor. Move the cursor to the very top-left corner of the screen, then hold A+X+Y and press B to bring up a display with info about an instrument. Pressing A and B (or using the mouse buttons) over a number will increment/decrement it.

The first number represents the currently selected instrument; this can also be set by using the normal instrument icons in the music editor. The remaining numbers control which sample the instrument uses, as well as parameters like transposition, panning (shown as left/right volume), the ADSR envelope, and more. 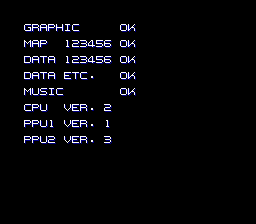 Holding Select on controller 1 when booting the game will also display the system's CPU and PPU version numbers underneath the normal memory check screen. This does not require the secret flag to be enabled.