Ecco: The Tides of Time (Genesis)

Ecco: the Tides of Time continues the plot where Ecco and his pod escape the alien planet after obliterating the Vortex home. The Queen was unprepared and he made quick work of her... However she managed to survive and followed the escaping dolphins back to Earth through the feed-wormhole and started to build a colony right here in the ocean depths. Ecco is unaware of these events until he loses his underwater breathing power, from which he takes notice that something strange happened. 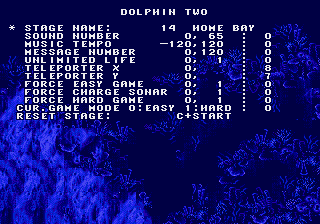 Similar to the first game, a debug menu can be accessed by pausing the game while Ecco is facing the screen and pressing A, B, C, B, C, A, C, A, B. The first seven options are the same as the first game's, and the remaining 5 do exactly as they say. However, the music tempo setting doesn't work, and the message displayer simply quits out of the menu. 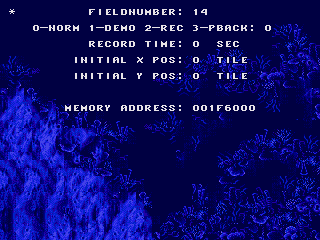 This feature is accessible in the 3 prototypes by holding one controller button during start-up, but was disabled for release. It's still possible to access it in the EU build, however, by calling the function at offset 0x0008D64E. One way to do so is using this pair of codes:

Then, jump out of the water while holding A. 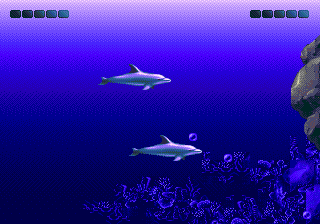 There is a co-op two-player mode that can be activated with the code FFA7B5:01001. This will display a second Ecco that can be controlled with player 2's control pad. This mode is present in prototype versions.

Located in ROM address 0x56C00. A thin tail segment for the thin-bodied segmented enemies in Atlantis, as seen in the earliest prototype. Because these enemies are only ever found chained to rocks in the final game, this isn't used.

An unfinished staff roll with obvious placeholder text exists in the final game. Use the following Pro Action Replay codes to replace the sonar map with the staff roll (US version):

The text as it appears in the ROM:

In the E2A prototype, there's a closeup on the Vortex Queen falling through the atmosphere. The code for it is long gone, but the scene data remains stored in the final builds. Ecco can swim in there because the data is stored as if it were a level, although there's no objects or anything and his palette is messed up, since Ecco wasn't supposed to go there anyways. To reach it, one level block from the game menu has to be replaced by this block. With these Pro Action Replay codes (for the US version), the second level block (It's just 1 level - Globeholder) is replaced by this one, called "bosshead":

Then use the debug menu cheat, and go to level 7. 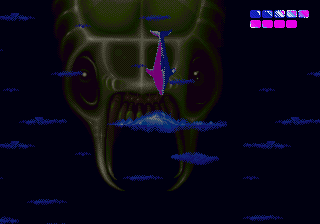 The title theme sounds slightly different in the European version, compared to the US and Japanese versions, due to more prominent echoing in the track.