FTL: Faster Than Light is a procedurally generated roguelike game that has you captain a starship to its doom, repeatedly.

Some of the internal names of the species and ship classes don't match their final, in-game names.

The most notable things here are the Engi ("circle"), the Slugs ("jelly"), the Zoltan ("energy"), and the Lanius ("anaerobic"). The Lanius are also occasionally referred to as "Shrike", and, informally, "metal aliens". "The Shrike" is also the name of the Lanius Cruiser's 'B' layout. It is perhaps also worth mentioning that the Zoltan ships are still called 'Energy' in their class names in-game.

In addition to the differences in prefixes, some enemy ship classes also have differing internal names, perhaps most notably the Slug ships; the Slug Interceptor (jelly_button), the Slug Light-Cruiser (jelly_croissant), and the Slug Assault (jelly_truffle). These names were likely originally used as the actual class names, as evidenced by the unused "Truffle Wreckage" ghost ships, which use the Slug Assault layout.

They Should Really Have Spacesuits
Have 10 enemy crew die while suffocating by sector 5.

There is a commented-out achievement in achievements.xml, which was originally the Lanius Cruiser's third ship-specific achievement, and was replaced with the achievement 'Loss of Cabin Pressure'.

The Lanius Cruiser has a commented-out layout in dlcBlueprints.xml with the blueprint name PLAYER_SHIP_ANAEROBIC_3, though the actual room layout of the ship can no longer be found in the game's files. A comment above the blueprint says:

The "U shaped ship with the inner ring of airlocks" is Layout A of the Lanius Cruiser in-game, indicating that this was originally going to be Layout A.

The 'Impossible Pirate' ship from the game's original demo is still present in blueprints.xml; it uses the pirate version of the Slug Assault class, with an Engi crew of 5.

Additionally, there are two 'ghost ships' in blueprints.xml (though these are commented out), GHOST_SHIP_MED and GHOST_SHIP_HARD, both with the class "Truffle Wreckage". They, like the impossible pirate, use the pirate version of the Slug Assault class (which was originally named the Truffle class). Neither of the ships have any crew, and hence would have operated similarly to automated ships. These ships were likely originally going to be used in the unused event GHOST_SHIP, which also made use of the removed 'ghost' species.

The Artillery weapons used by the Rebel Flagship have unused names and descriptions. The Boss Missile and Boss Beam also have commented-out descriptions that don't match the weapons, likely from the weapon blueprints that were duplicated and modified to create these.

The crystal shards from the 'Crystal Vengeance' augment have their own weapon blueprint (of the type 'MISSILES'; i.e. a missile launcher), complete with a placeholder description and tooltip. This weapon blueprint appears to be a slightly-modified duplicate of the 'Leto Missiles' weapon.

Many of the game's weapons have unused, commented-out descriptions, obviously from an earlier version.

These are two dummy crew blueprints (i.e. for species), seemingly corresponding to the Anti-Personnel Drone and System Repair Drones, respectively. It's not clear whether or not these are used; there is no crew blueprint for boarding drones.

The weapons of drones are internally considered weapons (in the same way that any other weapon is). Many of these have names and descriptions.

There are two unused drone types in blueprints.xml, both likely removed due to being too over-powered.

This unused drone type (BOSS_DEFENSE_2) appears to be a copy of an earlier version of the Defense Drone Mark II (or the duplicate of it which is used for enemies). The name of the blueprint would seem to imply that it would have been used by the Rebel Flagship; it isn't used in the final game. The above table only contains the properties that differ between the versions of the drone.

Comments in the blueprint for the used Defense Drone Mark II drone blueprints indicate that the cooldown of the drone was originally 750ms and the cost was originally 75, meaning that it is likely the only difference between the standard version and the boss version was the power requirement.

There are a number of commented-out ship augments in blueprints.xml, under various headings, a lot of which were never implemented. Furthermore, the ship-specific augment 'Titanium System Casing' was originally named 'Reinforced System Casing', and this name is still present, commented out.

Two of the commented-out "other ideas" ('Integrated Flight Suits' and 'Missile Replication System') were implemented in FTL: Advanced Edition, with slight differences:

An unused map pointer that says "TRADER". Internally, "TRADER" generally refers to events that give the player a single trade/exchange offer, as opposed to an actual store interface. These events can't be returned to, and are not marked on the map. 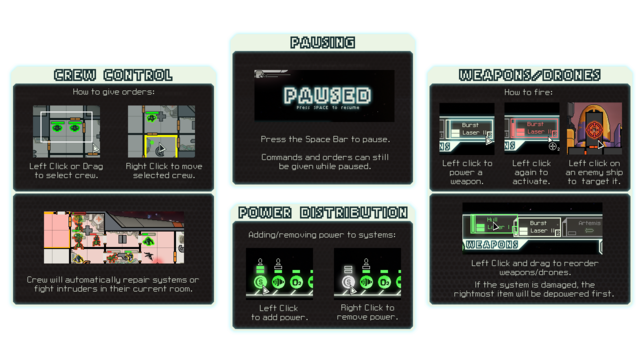 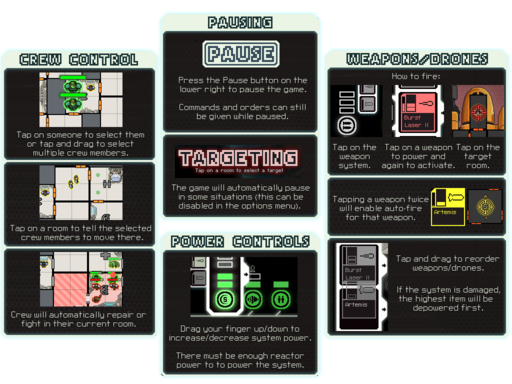 There are textures relating to a "ship challenge" stored with the hangar textures.

This small icon is also stored with the hangar textures. There aren't corresponding ones for any other ship.

There are octagonal versions of the weapons system icon present alongside the ones which are used. Octagonal icons (as opposed to round icons) are used for subsystems.

These icons also have seperate versions for the game's colorblind mode, though, unlike with the other originally-green icons, the green icons here have not been changed to white, and, indeed, appear to be duplicates of the original two green icons.

A version of the mouse cursor, with the scrap icon.

Unused buttons for the hacking system are present. In-game, the drone icon is used, until the hacking drone is launched, at which point it switches to using the same icons as the cloaking system.

Most of the game's sound files are prefixed with 'bp' (or for Advanced Edition sounds, 'AESFX' or 'FTLX'), likely referring to Ben Prunty, who did the game's music, and, seemingly, much of the sound design. However, there are also quite a few sounds without a prefix, mostly in WAV format (unlike the 'bp' sounds, which are OGG files), which are seemingly older and which are mostly unused.

There is a hitHull3 tag in data/sounds.xml, though for some reason it just uses bp_hit_hull_2.ogg again, instead of this sound.

This file has an OGG version, which seems to imply that this was replaced later than the others. There are a few other prefixless WAV sound files which have used OGG versions (not documented here).

This file also exists as both a WAV and an OGG.

This file is identical to the file 'shield_down1.wav' in the 'ship' directory (see below), a modified version of which is used in-game. The reason that this file is in the 'explosions' directory isn't apparent.

This file is identical to 'bp_door_close.ogg' in the 'ui' directory. Neither are used.

The used (OGG) version of this sound cuts a small part of the start of the original (WAV) sound. As mentioned above, 'shield_down1.wav' is identical to 'shieldsdown1.wav' in the 'explosions' directory.

This particular sound has a commented-out tag in sounds.xml, evidencing that it was replaced with the sound 'warning3.ogg'.

The file 'bp_door_open.ogg' is used for both the opening and closing of doors. As mentioned above, this file is identical to 'bp_door_close_1.ogg' in the 'ship' directory.

The used versions of this file and the below file are slightly longer and fade out.

The file sector_data.xml defines the possible sectors (and sector names). At the bottom of the file is a large comment, with sector name lists from a much earlier point in development:

The file names.xml defines the lists of names that are used for crewmembers (and enemy crewmembers), including the names of those who pledged over $100 to the game's Kickstarter, and thus had their names added to the crew roster. There is, however, a comment at the top of the section of the file with the backer names, with the following:

These names are indeed missing from the list of possible names.