A very little-known Easter egg was added to the Mega Drive/Genesis, Amiga 500, and Amiga CD32 (The Big 6 Collection) ports of the game. It only works when playing in English, and the final step is only known to work on Mega Drive/Genesis and not Amiga so far as anyone has found. It is not present at all in the NES, Master System, Game Gear. or DOS releases, and it will not work while playing in any other language, likely because the text for it was never translated.

Before completing Dora's quest, approach the prince in the Yolkfolk woods and give him the small pigmy cow having already received the bean from the salesman. A message will pop up:

He will drop an item called "Prince's secret sign", which can be used in the cave under the graveyard. If placed in the water, purple rain will appear and the player will be awarded 250,000 points, an order of magnitude more than by doing any other action in the game.

Although you lose the cow in the process, the game can still be completed since a large gold coin serves the exact same purpose in regular gameplay (though it can't be used to activate this Easter egg).

The Easter egg is a reference to Prince: the secret sign is his "Love Symbol", while the purple rain refers to his 1984 album/movie Purple Rain.

While technically used, the method of bringing up the help screen is somewhat obscure - you need to stay idle for almost 4 minutes. Moreover, this screen is no longer accessible after you correctly use either the wood plank or cooked ham; presumably this makes the game assume you know what you're doing. 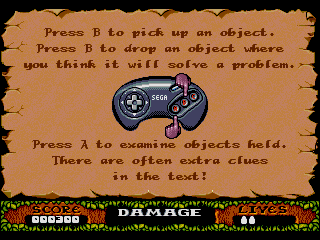 Press Right, Up, B, A, Down, Up, B, Down, Up, B (RUBADUBDUB) on the title screen to access a minigame select screen (or "Subgame Cheat Thing", as it's called in-game).

Notably, this is the only way "Puzzle Hole" (a sliding puzzle variant) can be played in this port, as it is not present in the main game. The 8-bit versions have it placed in the game world.