Quattro Adventure comprises four platforming games with stiff control, one of which is an actual adventure game.

All NES games developed by Codemasters are based on the same stub library. As a result, all of these games, including those on multicarts, include a "smiley test" that verifies the integrity of the PRG ROM and CHR RAM chips.

To activate the PRG ROM test, hold Up + Down + Left + Right + A + Select + Start and press Reset. To activate the CHR RAM test, hold Up + Down + Left + Right + B + Select + Start and press Reset. (These tests can also be run simultaneously by holding both A and B, and the results will be ORed together in RAM.) If the PRG ROM checksum matches with the internal value or the CHR RAM chip has no bad cells, the program will display a happy green face; otherwise, it will display a sad red face. The code also attempts to write the test results to an unknown device at $4400, possibly an automated cartridge tester.

Note that the tests cannot be performed with an unmodified controller, as the design of the directional pad prevents more than two directions from being pressed at once.

Between "ENTER YOUR NAME" and "BOOMERANG KID HIGH SCORE TABLE" in memory is this text string that sounds like an alternate name for the high score table.

In the title screen's bank of graphics for the sprites and company information, following the tooth shine graphic are these tiles for a small boomerang in four orientations along with a round piece of something that doesn't seem to fit any of the animated characters precisely.

During gameplay, between the exit arrow and enemy graphics, some unused tiles are loaded which appear to assemble like so:

They mostly show a boomerang shrinking as it rotates, followed by a "pop" effect (not the splash from The Caves' ceiling drops). The first frame has an odd shape and a third color that, in the used boomerangs' palette, is Boomerang Kid's skin color, so if this was meant to be a "warp out" effect, it might be depicting Boomerang Kid getting "warped" into the boomerang first.

Most unused screens of the world map are simply empty black voids, but there's one screen that's a little more interesting. This one is located two screens above the pogo stick's starting point and two screens below the end of the title sequence, indexed as $C8 in the game code. (In CPU memory, address $008D stores the index of the current screen, while addresses $008C and $008B determine the screen to be loaded during a transition.) 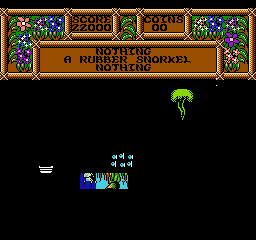 Amid the blackness are a stationary jellyfish enemy, a dehydrated boat (an item normally handed directly to Dizzy by the shopkeeper), a small clump of background tiles, and an enemy composed of six small fish not seen elsewhere in the game!

A less exciting unused screen is found at index $77, just above the screen with two houses to the right of the shopkeeper. This screen is filled with blue sky tiles as if it was meant to be jumped through, but either some platforms were removed, or the developers overestimated Dizzy's jumping ability, as this screen cannot be reached through normal play. If Dizzy is hacked to land on the clouds on screen $57 below it, jumping through the far-right edge will cause Dizzy to die as he passes through the top of screen $58, apparently from the upward transition teleporting Dizzy to sea level for a moment, which may have been a problem solved by cutting off access to there.

This "schooling fish" enemy, only found in a screen that can only be reached by hacking, appears totally functional. It patrols left and right a good distance, even hiding off the left edge of the screen for a while, and it kills Dizzy on contact. In versions of Treasure Island Dizzy for other home computer systems, a similar-looking enemy could always be found patrolling the eastern shore of the bay, equivalent to screen index $52 in the NES version, but that screen is devoid of enemies on NES.

Treasure Island Dizzy contains more unused music tracks than used ones! In CPU memory, address $0102 stores which music is currently playing, while $0109 stores whether the music is on or off. Only track indices $01–$04 are used by the game, but the next six values produce whole other compositions. Bear in mind that if you poke $0102 when the music has already started, it will not change to another track until it reaches its loop point.

Track $05 is a foreboding loop with crashing sounds from the noise channel.

Track $06 has a spooky exploration vibe, with trembling triangle waves sounding something like a theremin.

The only non-looping track of this bunch, track $07 gives a sense of rising action leading to a crash.

The remaining tracks sound more celebratory, with track $08 having a surf rock flair.

Track $09 is a very energetic piece that sounds a bit like a takeoff of track $08's melody, with multiple channels blipping between octaves in a complicated rhythm.

Track $0A is back to a more relaxed groove for its melody, even as it contains the crashing noise sounds, the trembling triangle waves, and the blippy chords between phrases.

Using an index greater than $0A only produces short, strange jingles or renders the used tracks differently, so such pointers were probably not intended for additional music data.

Between all the shopkeeper's dialogue and the first scroll about Hookjaw is some dialogue that belonged to the shopkeeper's twin brother on the mainland in versions of Treasure Island Dizzy for other platforms, but that character is absent from the NES version.

Normally picking up coins only increments the Coins counter, but hacking any of the coins into Dizzy's inventory will allow this text string to appear.

These two strings are found among the inventory items but were probably never meant to be objects, seemingly just a celebration of the development team as they were called in the secret credits screen. Their positions in the table of object names are not in the lookup table that begins at $303EC in the PRG ROM (although the position of "NOTHING" is a special case handled at the beginning of the lookup routine), so it's unknown what would have triggered these strings to appear.

The game menu's background color changed from purple to blue, and the new title lost the underline.

Because Camerica was not involved with publishing Codemasters games in Europe, all Camerica logos have been erased from Super Adventure Quests. (Boomerang Kid substitutes a second Codemasters logo for symmetry.) The Camerica logo is still loaded intact into CHR RAM in all three games that originally displayed it, however, and Boomerang Kid still contains the "LICENSED TO CAMERICA" text for its title screen; it just doesn't switch to it anymore.

As is standard for Codemasters NES games, both versions load tiles for both "1991" and "1992" in the Codemasters startup logo. The 1993 games quickly overwrite the "92" tile with a "93" tile, and Super Robin Hood uses the variant that lowers everything a bit to fit another "CODEMASTERS" above the logo.

Evidently in 1993 Codemasters was informed that NES color $0D is an unsafe "blacker than black" value that some monitors may mistake for a blanking signal or brighten other colors in response to it, so the European release of Super Adventure Quests replaces it with color $0E... for the most part. Boomerang Kid still uses $0D as the background color for blank screen transitions, for the status bar, and when the game is paused. Treasure Island Dizzy still uses $0D for sprites, and its background black actually flickers from $0E to $0D and back once every four frames!

For whatever reason, Linus Spacehead was the only game whose European revision added a speed compensation to the music for when it detects it's running on a 50 Hz console. Everything else on the cartridge just runs slower on a PAL NES.

The American version stops the background music when Boomerang Kid is killed and restarts the music from the beginning when the level is reloaded. The European version's level music continues playing through deaths and therefore only stops when another music track takes over (for Game Over, reaching the next world, or finishing the final world).

When the player is offered a choice of two levels, the American version prints the name of the level that the currently selected arrow will send them to. The European version does not, thus forcing players to take notes of which arrow leads to what level in the sequence in order to make informed decisions on replays. 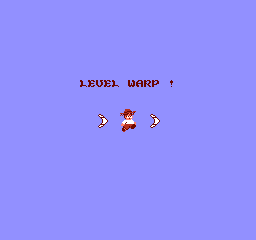 Level warps are invisible spots in certain levels that, when touched by Boomerang Kid, take him directly to the next level (or choice of levels) without needing to collect all the boomerangs. This happens through a standard world transition screen with the title "LEVEL WARP !" and does not award a time bonus. In the American version, level warps can be found in the levels "Shark City", "Shark Fin Creek", "Tower of the Forgotten Knights", "The Secret Chamber", "Backstab Alley", and "Hopping Mad Halt". In the European version, the level warps have all been removed (or possibly the game's development was branched from a version from before the warps were implemented, which could explain some other missing features). Even the "LEVEL WARP !" text is missing from the ROM data.

The level "Hopping Mad Halt" is bugged in the American version in that its exit never opens when all the boomerangs are collected, thereby necessitating the use of the level warp to escape this level. The European version fixes it so that the exit does open when it should.

When entering a name for the high score list, the American version makes the currently selected character blink on and off. The European version does not, forcing the player to learn from experience that it's the lowermost character on the wheel that will be entered.

The name starts as six dashes that are replaced as the player enters characters. If the player does not fill in all six spaces, the American version will replace any trailing dashes with blank spaces, but the European version leaves the dashes intact when the name appears on the board.

The blank space is also a selectable character, so a player of the European version could manually format a short name like the American version, but not vice versa. Strangely, neither version allows entering the exclamation mark that was already registered to "KID!" in the predefined score table.