Faxanadu is a side-scrolling action RPG, in a somewhat similar vein to Wizards and Warriors. It is part of the Dragon Slayer series in Japan, of which very few games have seen any sort of overseas release. 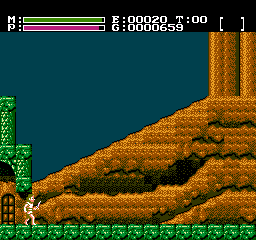 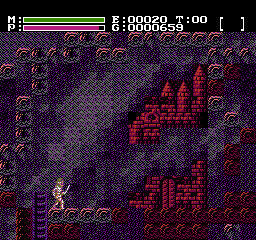 These two are duplicates of rooms which are actually used, although they do not contain any sprites. The second room actually appears five times in total. 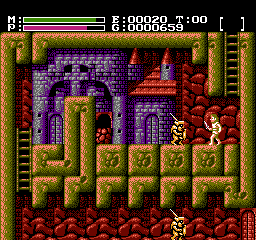 An alternative entrance to the final dungeon of the game. This one was probably scrapped because it is quite easy to just jump over the obstacle in the middle or because the lower level has no floor. 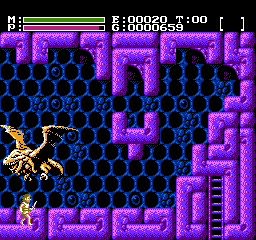 An extension of the King Grieve boss room. According to the room data, the left edge is supposed to lead to the used room (although it does not work properly), which suggests that the boss fight was originally planned to span over multiple screens.

Offset $2CC contains the IDs of the sprites visible on the screen. Interestingly, there are six enemies in the ROM which never actually appear in-game. The IDs of these enemies are 18, 29, 36, 39, 43, 70 (all decimal). 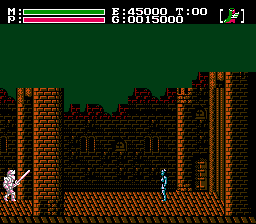 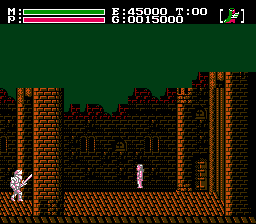 Additionally, there are two defined NPCs who never appear in-game. The first one is a lovely blue lady with ID 53, and the other is a child with ID 54.

The game contains two unused character portraits. They blink just as often as the other ones though. 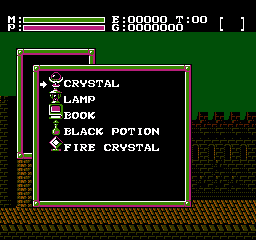 The game contains five unused items, most of which are taken from the PC-8801 game Xanadu of which Faxanadu is a spinoff of. Since none of these items do anything when equipped, it is unknown wether they would have functioned similar to their Xanadu counterparts. The item IDs are $0b, $0c, $0e, $11 and $15.

The game's script is mostly ASCII-encoded and starts at ROM offset $34310.

A variety of unused and possibly early conversations with shopkeepers. Some of these lines suggest that ealier in development it was possible to buy or sell multiple items without going through the entire dialog over and over again.

Looks like some doors were quite picky earlier in development.

This line is located around the text for Forepaw.

A generic line which is part of an unused dialog. The dialog contains a second line which is used and is about how magic can be used for justice or destruction. The game would have selected this line over the other one when the player owns the Thunder spell.

A near duplicate of the line the Guru says when giving the player the Ring of Dworf [sic]. It has slightly different wording in the beginning and is missing the last two sentences, suggesting that the Ring of Dworf originally might have been gotten elsewhere.

Another unused dialog, but this time, both possible lines go unused. The game would have selected the first line when the player does not own the Dragon Slayer, otherwise it would have shown the second one. The Castle of Fraternal is the second to last dungeon where the Dragon Slayer is normally obtained. The Fortess of Zenis is the name of the final dungeon, though it is only called that in the game's manual and not in the actual game.

The game selections were rearranged to fit the new copyright info added in the international versions. 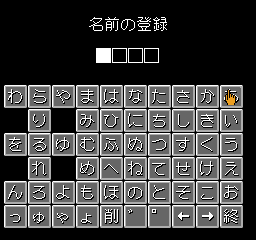 The Japanese version has an exclusive name entry feature. At the start of the game, the player must register their character's name, which can consist of up to four characters.

The name will be used throughout the script and will also affect what kind of passwords are generated.

The crosses on churches were removed in the international versions.

Inside the churches, the crucifix and rosary was removed.

The priests are known as gurus in the international versions, and their portrait was altered as well.