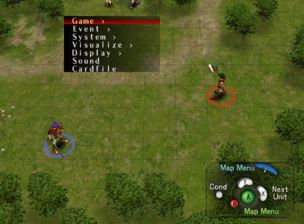 Path of Radiance has the most expansive and comprehensive surviving debug menu of any Fire Emblem game, and that's before you take its separate model viewer into account. Sadly, the final releases seem to have broken some of its features, but there's still plenty to mess around with. The menu is mostly translated, save for a handful of options. Certain menu listings exist only in the Japanese version, or were altered in localization; such listings are annotated in red.

As with regular menus, the Y Button can be pressed while navigating the debug menu to call help pop-ups, but in all cases it only gives a dummy help message, ヘルプデフォルト情報 ("Help default information").

Enter the appropriate Action Replay code for your version, then press B and Z while in a chapter to open the debug menu:

Bear in mind that the debug menu does not play all that nicely with the regular Z Button map menu: if you open the map menu at any point in a chapter before opening the debug menu, the debug menu will not open, and vice versa. 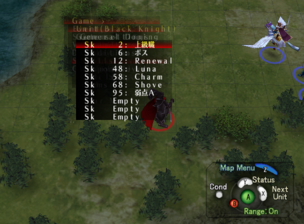 This skills editing feature is extremely comprehensive and lists not only all the regular skills, but the normally invisible ones that govern certain unit functionalities! This menu has 10 slots for skills per unit. Select an empty slot to add a skill there, and press X in a slot with a skill in it to remove that skill.

Many of the hidden and unused skills still have their names in Japanese or show as a blank in the list. Used, visible skills are listed in bold. 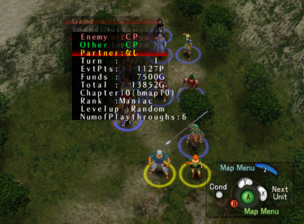 When selected on compatible objects - e.g. buildings, the droppable boulders in Chapter 25 - the Building option brings up a menu to toggle them between two states: 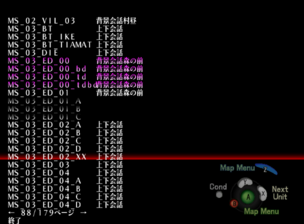 This screen is an index of every individual text entry in the game, covering everything from menu strings to dialog, sorted in alphabetical order based on the entry's internal handle (not the same order in which they're stored in the text files). Entries are presented in one of three colors, depending on their role in the game:

However, some listings may crash the game when selected - these are mostly village conversations, which crash because accessing them in this way fails to specify which playable character is visiting the place, and therefore which portrait should be called to display.

The functionality of the screen underwent one change in localization, regarding what it displays by default on the menu itself before selecting anything.

The total number of text entries listed by this menu varies in each version, differing as a result of the various additions and removals in the localization processes.

None of the options in this sub-menu seem to do anything in the game's current state. Trying to select them just backs out to the main debug menu. 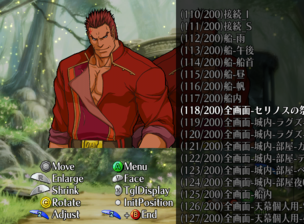 This screen allows the player to not only view background illustrations used for dialog scenes, but to twist and manipulate them to hell and back. In all, 200 images can be tested here, including stranger options such as chunks of the title screen and the Game Boy Advance link-up instructions.

Note that none of the image manipulation options affect the portraits, if they are turned on. 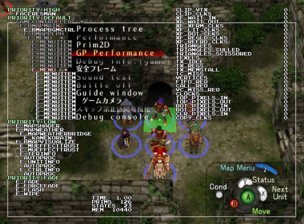 Toggles various displays on the screen, including both debugging functions and regular display options. 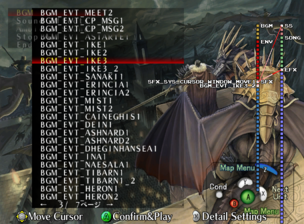 This option brings up a screen dedicated to sound options. Like the game's regular Sound Room, it displays cutscene illustrations in the background and slowly rotates through them. Opening this menu also enables the "Sound test" debug chart from the Display menu.

Pressing X on any listed BGM track or sound effect brings up options to tweak how that sound is played. BGM tracks can have their volume and panning altered, while sound effects have volume, panning, reverb, delay, pitch and distance options.

In the Japanese version, this option is labeled ファイル全体オープン, "Open entire file".

This option seems to be broken. Unlike other broken functions, selecting this briefly triggers some visible activity on the process tree: UNKNOWN > E_OPENSEQ > E_MCREAD > E_MCMOUNT. Other than this, though, the function does nothing but gray out the debug menu for a few seconds.