There are sets of unique stat data for a total of 12 variant mage and sage classes who wield only one magic element, like in Seisen no Keifu and Radiant Dawn, instead of this game's regular ones which can use all three magic types. These all come in both male and female variants. All of their stat data (weapon of choice aside) is identical to each other, though slightly different from the regular mages and sages. 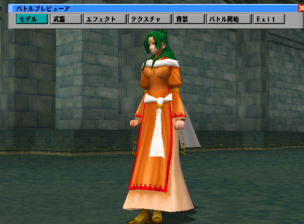 The female bishop class (JID/BISHOP_F) isn't actually meant to be a proper female bishop, but is just a dummy class used to represent miscellaneous characters who don't really fall into any other obvious class niche in cutscenes set on maps. It's most frequently seen used for Elincia before she gets her pegasus and becomes playable, and Sanaki also uses it. Despite this, it's mostly functional for gameplay purposes if you hack either character into your party, but it does have a few problems.

The most interesting part is the battle model: it's Elincia in an orange dress, but its design is much simpler than her actual orange dress in the rest of the game, resembling the game's male bishop robes. This model works properly for the most part, but it's clearly unrefined and has some clipping and texture problems, and the battle camera behaves a bit strangely when it's casting magic. Sanaki just reuses Elincia's battle model with no changes at all.

On the map, naturally, the class still has the same map models that Elincia and Sanaki use in cutscenes. However, Elincia's model has no animations for any gameplay stuff other than walking, causing the game to hang if you have her cast staves, shove, or attack with battle animations off. Sanaki has a shoving animation that the game also uses to cover healing and attacking, so she won't crash the game. 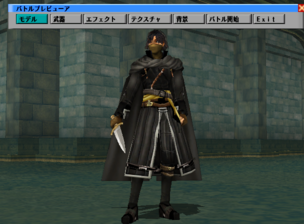 In regular gameplay, you'll only ever see one assassin in Path of Radiance: Volke, after promotion. There are no enemy assassins and the game's other playable thief, Sothe, is barred from promotion. There is, however, a generic assassin design that goes unused as a result of all this. Unsurprisingly it looks a lot like Volke's assassin model with a flat black color scheme and, on the map model, a dull blue scarf. Since Sothe has no assassin models of his own (or at least, no models properly programmed onto him), if the game is hacked to allow him to promote, he'll just use these generic models.

A female variant of the assassin class (JID_ASSASSIN/F) also exists, but has no unique models. Its stats are similar to those of male assassins, but with some very strange reductions (e.g. maximum magic is 10 points lower, strength and defense growths are tiny). Curiously, there's no matching female thief data at all. 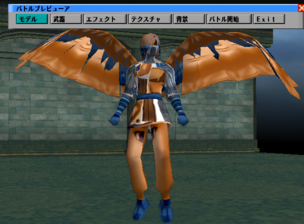 Although non-royal herons are extinct according to the finished game's plot, there's an almost finished generic heron class set (JID_BIRD_HE and JID_HERON), complete with unique map and battle models for their untransformed state. That said, the correct textures for the battle model are long since gone; concept art published in the Tellius Recollection art book gives a better idea of what they're supposed to look like. Their transformed state reuses Reyson's transformed models, albeit with different, duller textures for the map model. 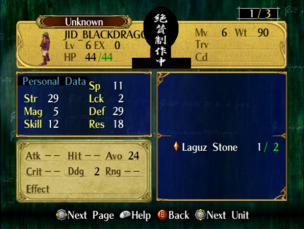 Black dragons are the only laguz tribe to not appear in gameplay in Path of Radiance, but there are very, very, VERY incomplete leftovers for the class. Naturally, Kurthnaga is in this class when he appears in cutscenes.

Neither form has battle models at all, and only his untransformed state has a map model. Even then he has no animations for attacking and shoving, so performing any action that isn't just walking will hang the game (not that it matters much, since there isn't a breath weapon for the class). Oddly enough, his posing animation for when he shifts is complete and plays properly, and all the transform gauge and shifting mechanics are also in place, except that he will still use his unshifted map model after shifting.

Like all the other laguz classes, the unshifted black dragon is known generically as "Dragon Tribe" and shares its description with the other unshifted dragons. The shifted form had both a name string and help text in the Japanese version, but the localization blanked both of these so it now just defaults to calling itself "JID_BLACKDRAGON". It's too bad, too, since the Japanese help text was unique: