In Ghost Master you are said master, strategically using your expanding team of ghosts to scare away or manipulate mortals to further the goals of the spirit world. A lot of stuff intended for the game got axed or cut down at some point mid-production. It's mostly well-hidden though, so long as you don't take too hard a look around the back of the Ghoul Room. Or look in the resource folders.

The game has textures, models, animation files and text for four ghosts that were scrapped. A fan mod restores them into the game, called Rejected Ghost Mod. A few more ghosts were cut in the early developing stages and a few pictures and infos are here and there, but nothing is left in the game's files.

Azrael was a headless horseman type. It was supposed to be a Restless spirit in the cut Ghost in The Military Machine mission. 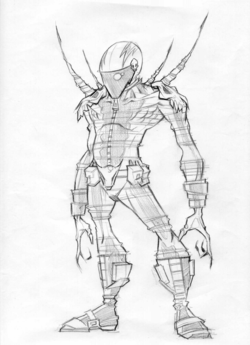 Azrael has the two .tga files that every ghost has for their icon (one for the picture itself and one for the green shadow outline), called azrael and azraelb - but they are duplicates that proclaim Azrael's departure from the game. The same image is also present as defaultchar.tga and as a filler for whirlweird_b, as Whirlweird does not need the green outline.

Azrael still has a unique audio folder with all the templates set up for unique sound effects, but there's nothing in it.

"My mission has been terminated by hostile forces." 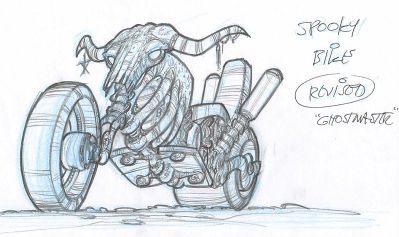 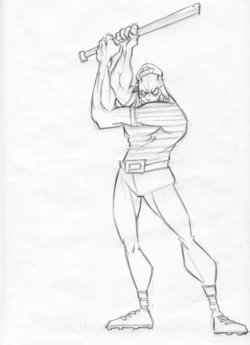 Smokin Joe was a phantom type. It was supposed to be a Restless spirit in the cut Field of Nightmares mission.

Smokin Joe still has the two .tga files for his icon.

Smokin Joe still has a unique audio folder with all the templates set up for unique sound effects, but there's nothing in it.

The subtitle.map file still mentions Smokin\' Joe, and his demise.

Soulscreech was a banshee type. Judging by her remaining epitaph, she was supposed to be a spirit brainwashed by the government and hostile to the player.

Soulscreech has icons, as well as a model and an animation file.

Soulscreech still has a unique audio folder with all the templates set up for unique sound effects, but there's nothing in it. Two voice lines for the ghost's dispelling and banishment are present, though:

"I cannot remain here any longer."

Both lines are also translated to Italian: 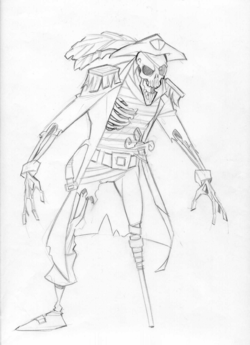 Thorne was a wraith type. It was supposed to be a Restless spirit in the cut The Abysmal mission.

Thorne still has the two .tga files for his icon, as well as a model and a dummy animation file.

Thorne still has a unique audio folder with all the templates set up for unique sound effects, but there's nothing in it.

Crazy Bill is represented as an old postman who wields a letterbox with a pointy end as a weapon. His concept art can be found in the Bonus Content DVD of the video game.

Ghost With No Name

Ghost With No Name is a gunslinger, probably aspired to Clint Eastwood. He was supposed to appear in the cut mission Field of Nightmares. His concept art can be found in the Bonus Content DVD of the video game.

Hunchhork was probably a movie director in his part, as he is depicted handling a camera. He also wears a scarf and a beret and he sits on a director chair in his render. His concept art, along with a render, can be found in the Bonus Content DVD of the video game.

Moribund is represented as what appears to be a drill sergeant. His concept art can be found in the Bonus Content DVD of the video game.

An icon for a female and a male scuba diver. Both were from The Abysmal cut mission. Their models, textures and portraits are still in the game and can be modded back.

The game uses green silhouettes for restless spirits in missions that have not been found and talked to, at which point their normal portrait is used instead. A considerable number of ghosts have this sort of portrait, despite not appearing as restless spirits.

These are all portraits for haunters you start the game with, and who therefore need never be recruited. Whirlweird is absent in this list, because its second portrait is a copy of the placeholder used for Azrael's portrait above.

These six haunters are given to you at the start of acts 2 and 3 and as such these are never seen, but they were all originally intended to be recruited during missions.

The Dragoon and Stormtalon are relatively special cases: While the dragoon shows up in Spooky Hollow and can be talked to there, its portrait doesn't appear until you recruit it. You cannot beat that mission without recruiting it, so this green portrait can't show up during the score tally either. Stormtalon, on the other hand, has no indication they're in the mission at all, and their portrait doesn't appear until you recruit them either. 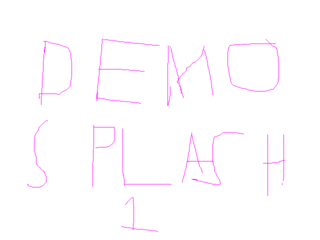 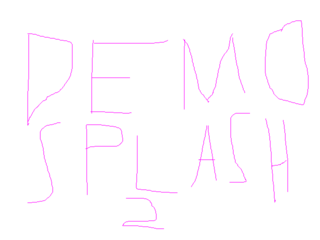 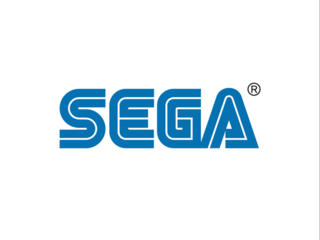 While the game was indeed published in Japan by Sega a year later, a splash screen with a wrong 1px vertical line (and a video, see below) is present in all versions of the game.

An early version of the game's logo. Note the spirit faces in the mist, which feature on a couple earlier logo designs. 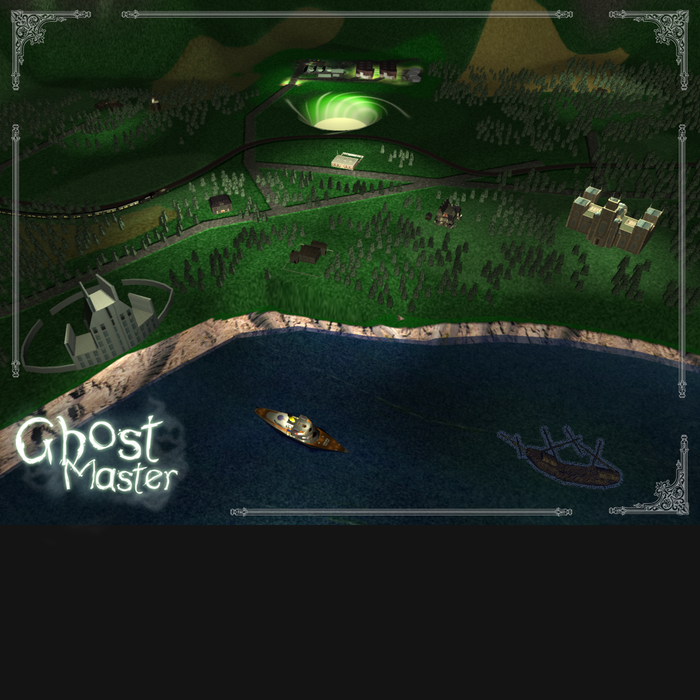 This large 1024*1024 map can be found split up in four pieces, empty space at the bottom imcluded. The ship for The Abysmal and the train for Trainspooking are present on this map, as well as earlier designs/layouts of the police station, the ghost mansion, and the military base. It's unknown what the big glowing hole is. 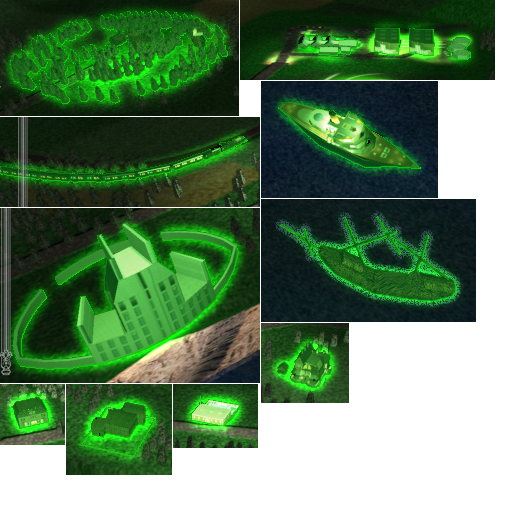 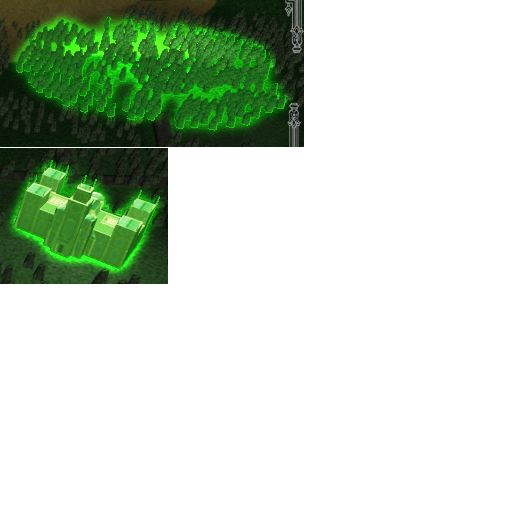 A few images with map highlights to be displayed on top of the map. 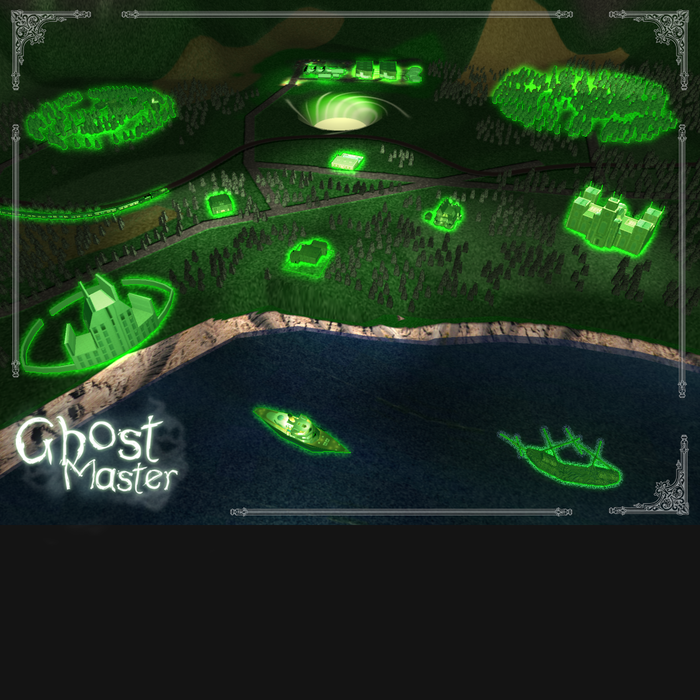 Although it's unlikely that every highlight would have appeared at once in-game, this is what the map looks like with highlights overlaid on top. 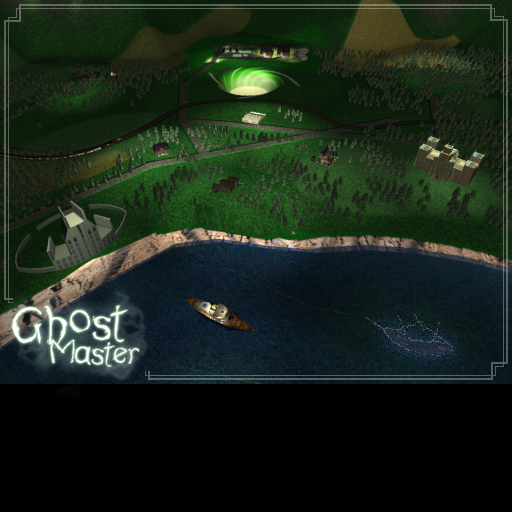 The same split-up map, but at half the resolution and with a different, simpler border. 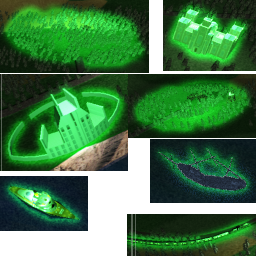 A matching set of highlights. 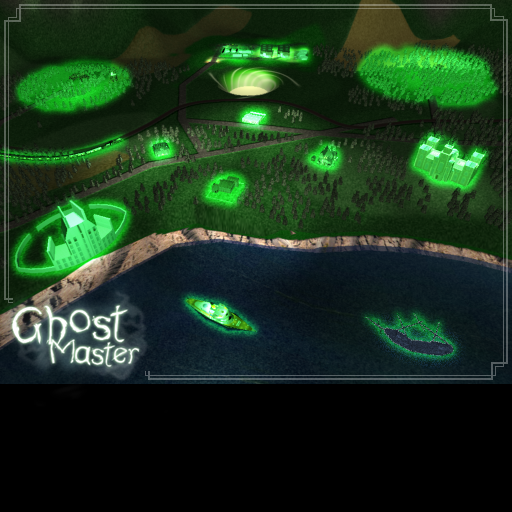 This is what this map looks like with the highlights overlaid. 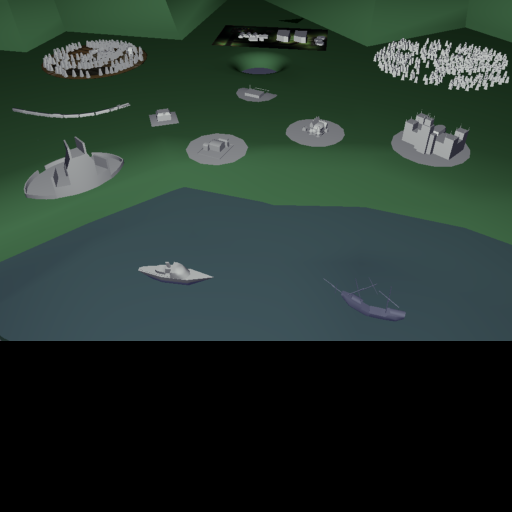 Another smaller image of the same scene, taken from a slightly different position and untextured. The levels look more like board game pieces in this version. 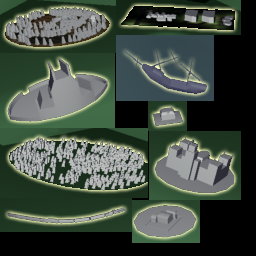 Again, highlights to go with it. Here the levels get a yellow glowing halo, instead of glowing bright green entirely. 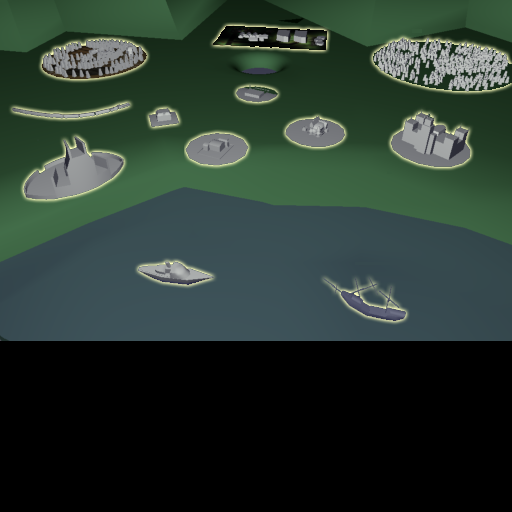 Again, a mockup of the map with all highlights applied. 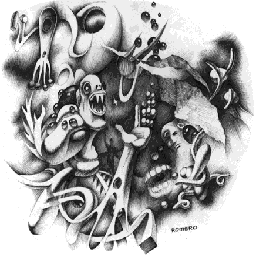 A 256X256 scaled version of the painting Nightmare by Artie Romero. 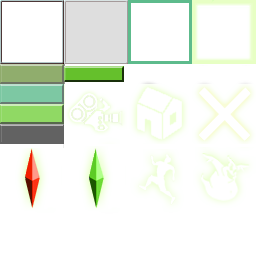 The game has always been critically compared to The Sims, so it's ironic to see Plumbob present in the graphic. 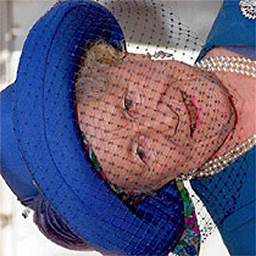 A 90° counter-clockwise picture of Queen Elizabeth The Queen Mother, who passed away during the game's production in 2002. 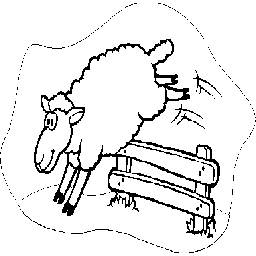 Clip art of a sheep. 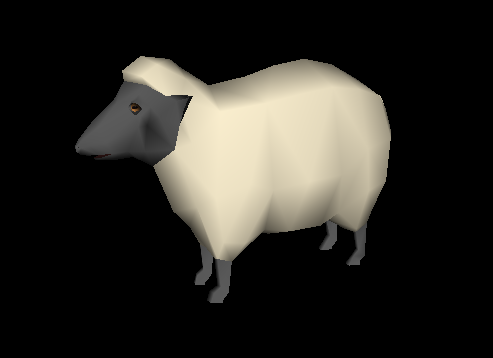 Keeping with the sheep theme, this modeled one is in the files. While it doesn't appear in-game, it is rendered in the images displayed when looking through the POV of a mortal dreaming or having a nightmare. 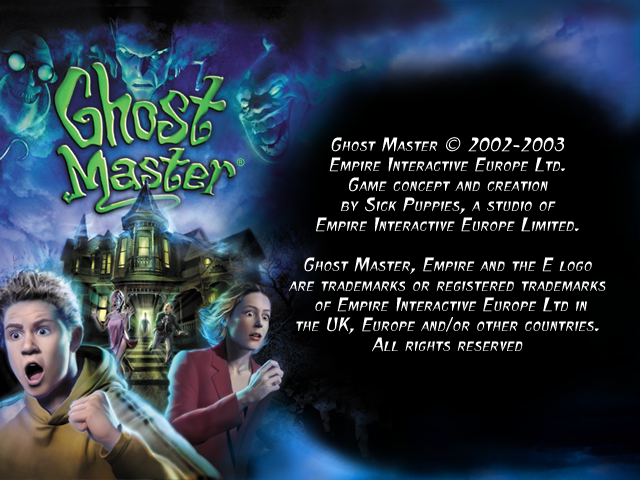 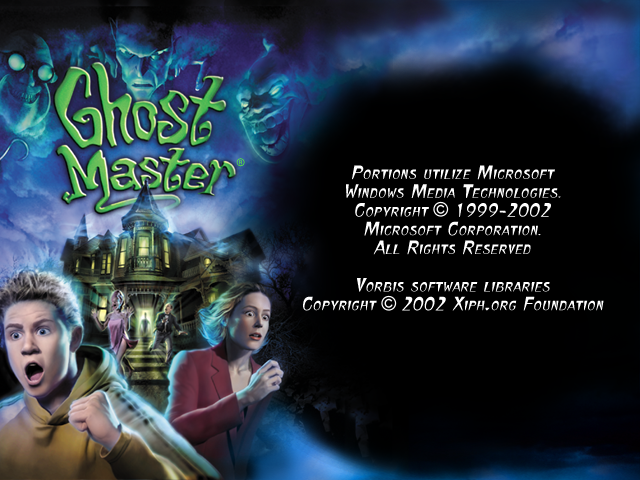 Another version of the two legal splash screens featuring the same art on the American cover of the game.

Although the power Shriek has this sound associated with it, the power is programmed to play a random female NPC fear sound.

The sound for Labyrinth, a scrapped portal spell (of which only Hidden Room made it in the final game).

The sound for another scrapped portal spell, No Way Out.

The Ghostbreaker ice cream van driving onto the map for Class Of Spook'em High is silent in-game, even though there is a file titled map_gb_van_skid. It's not the most serious choice of audio in the game though.

An unused audio for a seemingly cut "Act 4", in the final game Act 4 was replaced with the Epilogue.

The game contains two unused videos; one is simply the Sega intro video (which goes of course unused in all versions of the game but the Japanese one) and the other one is a short, sped-up video of some guys on ice.

Footage from the latter is actually present in a short YouTube video made by the developers themselves where they goof around with the game's engine.