High Seas Havoc is about an anthropomorphic seal, Havoc, who finds a girl named Bridget on a shore. She holds the map that points to the location of the precious Emeralda. After they become friends, Bernardo, a pirate, kidnaps her and Havoc's sidekick.

The game features your classic platforming elements like enemy-stomping and "100 = extra life" collectibles. 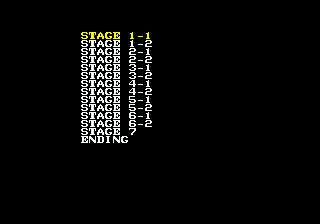 Now, begin a new game to start on the selected stage, or view the ending.

On the VRAM, blocks that aren't being used have "FREE" written on them.

The US and Japanese versions start on Cape Sealph, after which is the Pirate Ship. The European version starts on the Pirate Ship, although Cape Sealph is still present: when the game loads, it's set to open level 0 (Cape Sealph), but at the very last second, before the level introduction screen appears, it quickly sets the variable to 1 (Pirate Ship). You can use Action Replay code FFDBED:0000 or Game Genie code ADP9-8AHP to force the game to load Cape Sealph.

Whenever there's a fade out in the European version, the game just fades to black. The US and Japanese versions add a bit more color.

Finally, the options screen and the level introduction screen (the one that shows the level's name) have a different background for each version. The US/JP versions have the Data East logo inside every cell of the background pattern. The European version has the Codemasters logo instead, which takes up 2 cells horizontally. The small heads also open their mouths at different times for each version in the level introduction screen.

The demos are a bit different between versions. They use the same levels, in the same order, and they're both played with 0 lives, but the players have different personalities, so to speak. The US/Japanese player gets hurt a lot more and is less aggressive, but more willing to go fast. The European player is more careful, but more willing to defeat enemies and get treasure.