Home Alone for the SNES is one of the many, many games based on the classic movie. This one takes quite a few liberties with the source material, giving Harry and Marv a couple of extra partners in crime and turning the McCallister house into a sprawling mansion with wings dedicated entirely to toys, electronics and pets, alongside a haunted basement (yes, really).

Fun factː it's also the second Western developed game for the system, and the first one to not be based on an existing game. 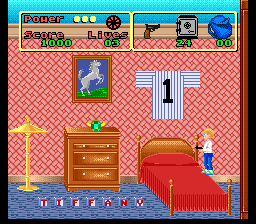 As soon as the game starts, turn around and jump on the bed. Go to the very right edge of the bed, and as Kevin reaches the very top of his jump, press Down+X. "Tiffany" will appear on the floor, and you will receive 1,000 points.

The above isn't limited to the first room; most other rooms work in the same way, with other names popping up. 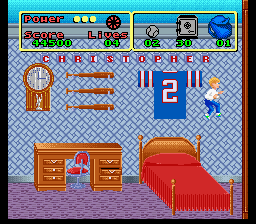 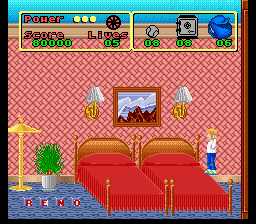 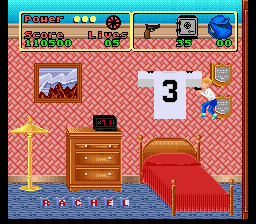 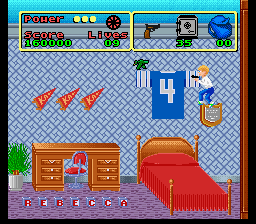 The Japanese version gives you 3 continues, while the US and European versions only give you one.

In the Japanese version, "Power" and "Lives" were changed to "Life" and "Kevin".