House of the Dead: Scarlet Dawn

The House of the Dead returns with alternate weapons, even larger hordes of creatures, and Unreal Engine 4 graphics. Currently the only game in the mainline series that lacks an official home port.

Scarlet Dawn's Japanese version has exclusive features like a player level-up system, purchasable weapons, an achievement system, and support of the Aime amusement card. The International version lacks these features, but the textures remain in the data.

Lots of leftover assets from the Japanese version's e-money support.

Textures for the HODCoin, which was the currency used in the Japanese version. Players earned HODCoins from repeat playthroughs, killing enemies, and collecting items. They could then use them to purchase weapons from the item shop. In the overseas version, all of the weapons were available for free (with the exception of Machine Gun+, Shotgun+, and Extra Life, which were missing in the International version) due to the lack of currency feature.

The Japanese version offered missions that the player could complete in repeat playthroughs. 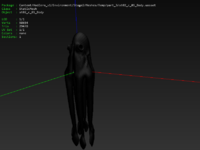 An unused temporary model for The High Priestess, a boss character in the Laboratory level, which was originally portrayed as a small squid instead of a giant squid in the final version.

Music from the Japanese version when the game asks you to insert the Aime card.

Music from the Japanese version's "Mission" screen, which appears after you get a game over or beating the game, and shows the goals you've achieved to earn more HODCoins.

The Japanese version features most of the online content that went unused in the International version (see above) and the game can be played through Aime card. The Japanese version features two modes: Normal Mode and Master Mode. Master Mode is the very hard mode where the players can fight through many hordes of creatures to survive and does not provide specific weapons during each of the Chapters (with the exception of boss fights). The International version removed these and replaced with a completely different mode select screen that offers players to start from the beginning (Chapter 0) or go through the later three selectable Chapters. The difficulty in the version is a mix of both Normal and Master Mode's difficulty. Machine Gun EX was called "Machine Gun Double" in the Japanese version.

The English localization is incomplete, with most of the subtitles for gameplay and cutscenes left blank in the game code. The only English subtitles present are for The Moon and The Hangedman's dialogue, AI voices ("Scarecrow Manor" chapter and "Laboratory" level), level complete screens, and the "final result" screen at the end of the game. However, it is possible to bring the subtitles back by modding the subtitle file from a different language files (Spanish language for example).

(Source: The Wiki of the Dead)