Hypnospace Outlaw is a wholly remarkable game set in an alternate universe where, apparently, the point of divergence is when someone plagiarized the game of tennis and made it a game for three players. The result is the internet becoming a brain-computer interface... that works while you sleep! As an HSPD Enforcer, your task is to browse Hypnospace for any offending/illegal content, but you can also get side-tracked and download an assortment of fun things, and discover side-stories within a huge fake internet!

There's an unused video file which claims three Hypnospace users are dead, even though the fewest who can die is four (at least right now).

This is also accompanied by an alternate newspaper graphic on the HAP pages. 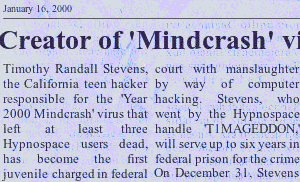 y2000update.webm in the "downloads" folder, there is an early version of the Y2000 update video that appears at the start of Chapter 3. The only differences this one has to the final video is the loading bar, and the loud, sudden ending. This video was removed in the PLUS update.

myamazingtalk-2017.htv, in the "downloads" folder in the game's data, is a subtitled video of Jay Tholen speaking at Fantastic Arcade 2017, discussing the concept of the game.

test.htv and testbig.htv, also in the "downloads" folder, is... well, exactly what it says on the tin. For some odd reason, testbig.htv has reduced audio quality.

hs_innerrealm.htv, in the "screensavers" folder in the game's data, appears to be the basis for a screensaver that was initially scrapped.

The screensaver was eventually reinstated in the PLUS update.

Some leftover images/gifs from the files, most of these still exist in the game's files.

A leftover from the cut HSPD Outlaw Detainment Zone.

A wallpaper of Son of Tim is in the game files, however it is currently unobtainable by normal means. 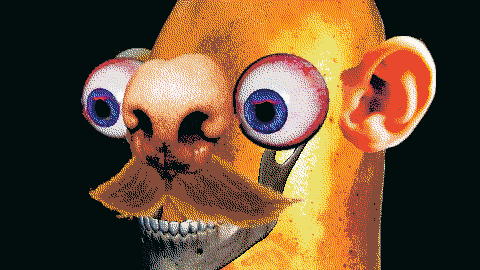 A promotional image for Minit, used in a Twitter video by Jay Tholen. Can be seen here. Other assets are visible in the video, but this is the only image left over.

Early designs for SquisherZ, replaced by more cartoony versions in the final release. These can be seen in the 2018 Trailer, and these sprites still sit in the images folder.
(Note: A few pages might use a few early Squisher designs)

While images for these zones still exist in the images directory, the zones themselves no longer exist.

In the downloads folder, a file titled 2-15-2019-endgamerevamp.txt is left over. This file was removed with the Modding Update.

As the filename suggests, this file was created just around a month before release. Jay Tholen gave an explanation for this file:

The only thing that wasn't explained, was the "Glasses Disguise" mentioned with what seems to be the different parts of the Tutorial.

Other text files can be found, such as nongamesstuffforjay.txt.

This is what seems to be writing/scripting for the page "The Dumpster". Yet again, this was removed in the Modding update.

In the files, tut-03.png looks like an ordinary screenshot, but upon further inspection you'll notice the "DAY 0" text. This is a remnant from when the game was going to originally follow a day-by-day schedule, instead of the chapters spread across weeks in the final game.

Jay Tholen said some stuff about this in the Hypnospace Discord:

The Hypnospace Plus expansion adds, as well as changes, a few things.

In the original game, a dispute between two citizens saw this rather graphic animation produced, which was altered to be far less graphic.

When asked about this change, Jay Tholen said the following on the Hypnospace Discord:

Oddly enough, the sword hilt from the original animation is still there.

These two Hypnospace Discord users are included in their own in-game wedding, as a secret page (appropriately placed in the secretpgs folder).
Their in-game pictures were redrawn for the Hypnospace PLUS update, most likely to prevent any copyright issues with their avatars.

The console can be used as a debug tool, essentially. You activate it by holding B when HypnOS is booting, and checking "Enable Console". Then when playing the game, press ~ to bring up the console. Here is a list of known commands and what they do.