One of Rare's lesser known AAA titles for the Nintendo 64, Jet Force Gemini didn't sell particularly well, only about a million copies and has never had a sequel. It was generally met with very solid reviews, despite being criticized for the somewhat clunky camera and stiff controls. It's also pretty gory for a T-rated game.

A debug mode can be enabled by pressing C-Left, C-Right, C-Up, C-Down, R, L, L, R, C-Up, R, C-Down, R, L, C-Right at the title screen. A small box will appear at the bottom right corner of the screen, which displays various information such as the coordinates for player 1, current location, and the amount of free RAM. 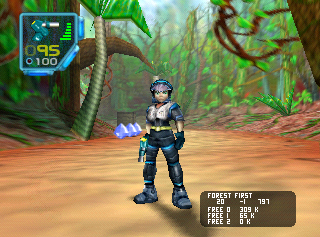 Alternately, you can apply the following GameShark code for the same effect:

A total of four debug cheats that were a part of the debug menu in the kiosk version of the game also remain in the final version. The unlimited ammo and unlimited health cheats can also be seen used in the E3 demo version of the game. Apply the following GameShark codes to enable them. 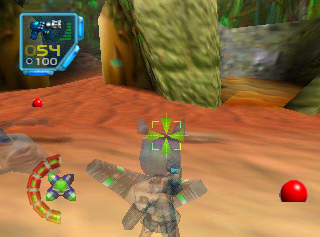 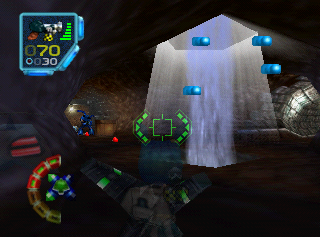 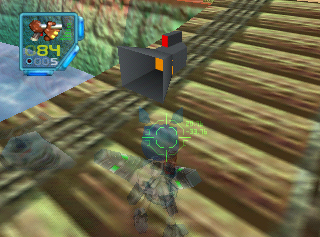 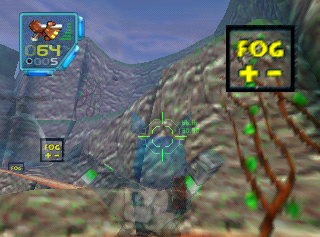 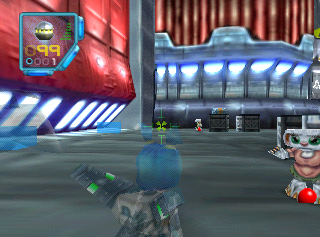 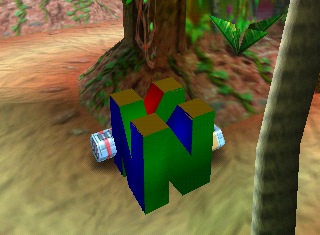 Applying the below GameShark code will display various debug objects in the current map, normally unseen. This will also display red orbs whenever you kill an enemy, display N64 logos in some cutscenes, and render all models during cutscene at once that are normally invisible.

If the game crashes while debug mode is enabled, it will display crash debug screens. A and B change pages, R zooms in and out, C buttons allow you to view different addresses on page 2, and Z views the different memory regions on page 6.

A high resolution mode appeared to have been planned at one point in development, but unfortunately, the code for the mode was never completed. As a result of being incomplete, the mode does not move objects on screen accordingly nor does it work after a level load, resulting in a crash. If you wish to see the results of the high resolution mode yourself, there are GameShark codes below to enable them. Apply the code, then reset your game if you are on a emulator.

A green and black cube found among the models used on the map screen.

In the Invasion cutscene (the one that King Jeff shows Juno at the beginning of the game), the Nintendo 64 logo appears right as the ship lands on the tribal. It can't be seen normally because it is hidden inside of the ship.

The logo model itself isn't used anywhere else, not even in the logo sequence. 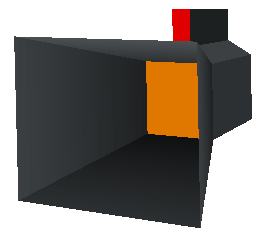 A camera that is used in cutscenes to represent where the actual camera is. It's usually invisible in-game because it's offscreen, though it can occasionally be seen in the distant background of some cutscenes (for example a secondary camera can be seen rising out of the lava just before the boss explodes on Ichor - this is more readily viewed in the Rare Replay rerelease, but it's also faintly visible in the original N64 version). It's also present in Diddy Kong Racing and Mickey's Speedway USA.

A green texture with a red X and "SHOOT ME BIG BOY" written on it. Internally named SecretDoor.

An unused pad with a rocket on it. Internally named BombPad.

Use the map modifier code 810A323C ???? to appear in a cutscene from the below sections. 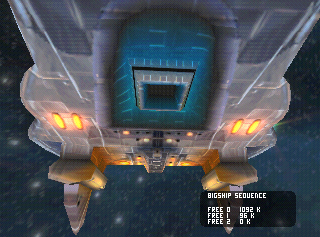 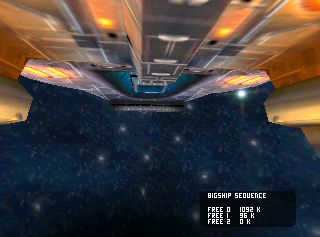 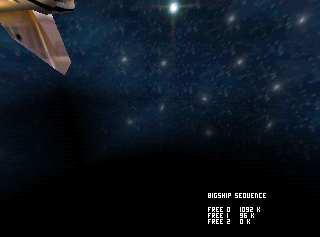 A cutscene featuring a large ship not seen anywhere else in the game. This cutscene appears to be unfinished as there's no audio and it softlocks the game as soon as it's done playing. 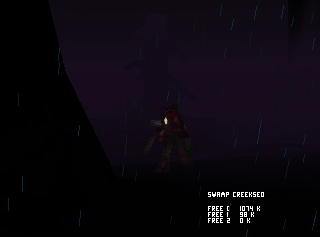 An unused cutscene in Tawfret which shows a zombie ant slowly walking towards the camera. After a few seconds, the screen goes white.

This is essentially the same as the used Goldwood takeoff sequence, except it plays Ichor music at low volume and the SFX is louder. The used version of this is value: 0061. 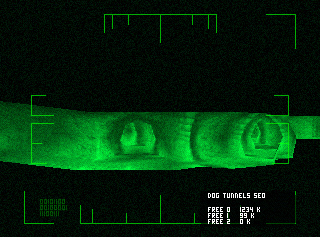 An unused Mizar's Palace sequence. No player is spawned in this cutscene. The game essentially softlocks. 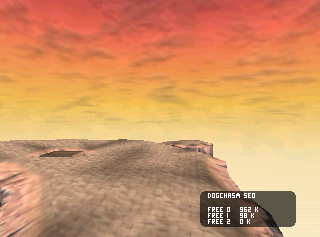 An unused Mizar's Palace sequence. No player is spawned in this cutscene. The game essentially softlocks.

An unused dragonfly enemy which can only be found in the unused OTHERS test map. It's currently unknown if this enemy is still functional.

An unused lava enemy which can only be found in the unused OTHERS test map. It's currently unknown if this enemy is still functional. 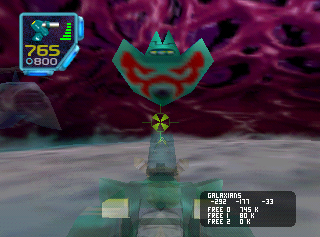 A fully-functional unused drone enemy which can only be found in the unused GALAXIANS test map. 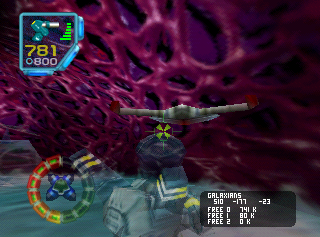 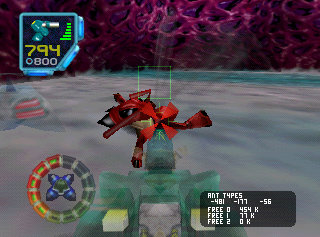 An unused flying red ant only found in the unused ANT TYPES test map. It appears to be fully functional as it will shoot you if you get too close. Since the map it appears in has no AI programming, it won't move around. 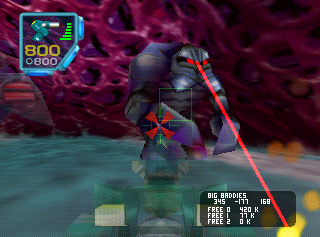 A large robotic enemy which can only be found in the unused BIG BADDIES test map. When you're near the enemy, it'll fire a laser which harms you. Oddly, it makes a rooster crowing sound which was most likely just a placeholder.

An unused weapon can be found left within the game. The projectile consists of one green bullet, however, when hitting a wall it will branch off into three extra projectiles. This goes on for about four seconds until it disappears. When a direct initial shot hits an ant, they will explode. The gun has no special icon or sound. The sound is that of a pistol shot, and the icon is of the Grenade weapon. Apply the following GameShark codes to have the weapon:

Add to Juno's Inventory (must have at least 2 weapons first):

Or replace Juno's current weapon with it:

Two drum type instruments which were used in GoldenEye and Perfect Dark can be heard here.

An unused jet pack sound which was only used in Blast Corps can be heard here.

A rooster crowing. This sound is only used by an unused enemy.

You can apply the following GameShark code to listen to them in-game.

Where "??" should equal one of the following values:

The third song was originally value 4F in the kiosk demo version of this game. The first two unused songs remain the same.

Present at 0xC36CCD in the ROM is leftover text from Diddy Kong Racing, which was developed by the same team.

Present at 0xC37641 in the ROM among the options text is unused text referring to the unused high-resolution mode.

Present in the ROM is a build date along with the version number that's displayed in the crash debugger.

Present at 0x1F3B180 in the ROM is text that was used for the level select in the kiosk demo's debug menu.

Present at 0xA3DDC in the ROM is a build date left over from something else.

Out Of Bounds Boxes 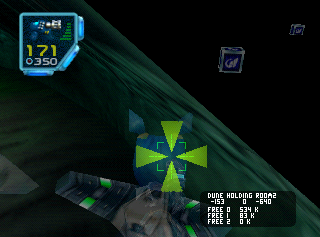 In the second area of Cerulean, there are a couple of small blue boxes placed just outside of the map. It's possible to see these in-game by clipping the camera through the wall. These boxes don't appear anywhere else in the game.

You won't be able to use any of your weapons including the fish food. Pressing Z will make your character hold their weapon up, but they won't fire anything which makes it impossible to get past the first life force door in Goldwood as it requires you to shoot down three enemies.

Most backup devices usually piggyback off of another cartridge containing a 6102 or 7101 lockout chip which activates the anti piracy function.