The iOS version of Jet Set Radio is a mobile port of the 2012 re-release of a cult Dreamcast game. Compared to its console/PC brethren, it features slippery touch controls, uses swipe controls for graffiti, removes the documentary, requires an internet connection to listen to the Jet Set Radio Future songs, and uses the same icon for all its achievements. (Or so you think...)

iOS 8 broke compatibility with this game. Rather than fixing it, Sega pulled the game off both the Apple and Android app stores. It's safe to say that the unused content will stay that way.

Some screens, like the Radio, were left at their original Dreamcast resolution. This makes navigation of the graffiti selector and editor particularly difficult, due to the tiny icons.

The Stage Score screen shows what is presumably a button at the bottom-right of the screen, labeled "Return to the Garage". It does not function, and the usual "back" button on the bottom-left must be used to return to the menu. 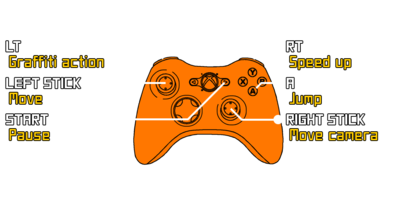 The main folder, JetSetRadio.app, contains a large amount of console leftovers. For example, icons of Xbox 360 controls are present, which are used in the console/PC versions, but not on iOS due to the use of touchscreen controls. The image of the 360 controller with its functions is also in there.

The picture of DJ Professor K saying "Loading" is present, used while starting up the console and Android versions, but not used in the iOS version. 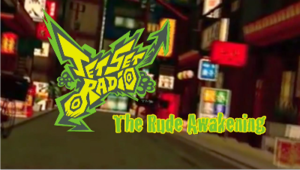 A documentary of the game's development, called Jet Set Radio: The Rude Awakening, is included in the console/PC versions and can be viewed from the Bonus menu. It does not exist in the iOS version, presumably to save space. The icon for it on the Bonus menu still exists though.

In Game Center, all of the achievements use the Jet Set Radio icon (seen on Graffiti Souls). However all of the console versions' unique achievement icons are present, just not used. Why? We will never know.

Never seen in any version. 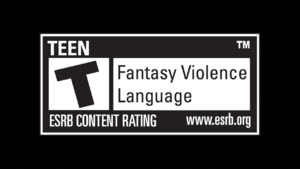 A black screen displaying an ESRB warning exists but is never used. Curiously, the content descriptors don't match the rating for any version of the game.

Along with the standard colored icons for jumping, centering the camera, spraying, dashing, and fleeing from a tag site, there are 5 alternate, unused versions of them, with a "_d" appended to the regular file name. Unlike the used icons, they are black and white, with different designs. The dash and jump icons show a skate instead of a triangle performing those actions. Probably scrapped due to being difficult to see in locations with low lighting like Benten-cho.

By switching file names, these early icons can be used in place of the regular ones. Curiously, switching the Spray icon causes the game to crash whenever starting a level.

DJ Professor K has an icon similar to the "Loading" one that instead says "Saving". This is not used in any version of the game. 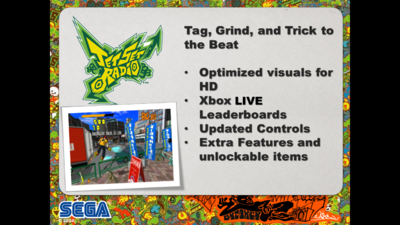 Several images named upsell.png and its language variations exist. They show an advertisement for the full version of the game, normally displayed on the Xbox 360 version after completing its free trial. The 360 version allows the player to purchase the full game from this screen.

Full artwork images of several characters exist but are not used.