(The original JET SET RADIOOOOOOOOOOOOOO! experience has since been recreated on modern consoles, including iOS. This time the US didn't crash the party.)

An early texture of Beat is found in DEMO14.AFS. The name on his T-shirt says "Ereki", which is short for "electricity", thus the lightning bolt and the light bulb. His headphones also look slightly different and there are knuckle holes in his gloves. The graphic for his wrist computer thing also hadn't been implemented yet. On another note, you never actually see him without his glasses, so the eyes are unused. DEMO28 is a bit closer to the final design here, but still very different looking. His headphones and gloves still hadn't been changed, and his wrist gadget is still missing.

This texture of Gum is also found in the DEMO28 file. Just some minor tweaking here. Her wrist device also hadn't been implemented yet.

This photo of Combo, Cube, and Coin is used as a character select graphic when you first play Chapter 2. The early/placeholder graphic on the left can be found in the file "GARAGE.AFS", while the final version can be found in "U_GARAGE.AFS". It looks like Coin, the center character who was kidnapped by the Golden Rhinos, went through a bit of a design change. The texture below the picture is of the piece of tape that holds the photo up. 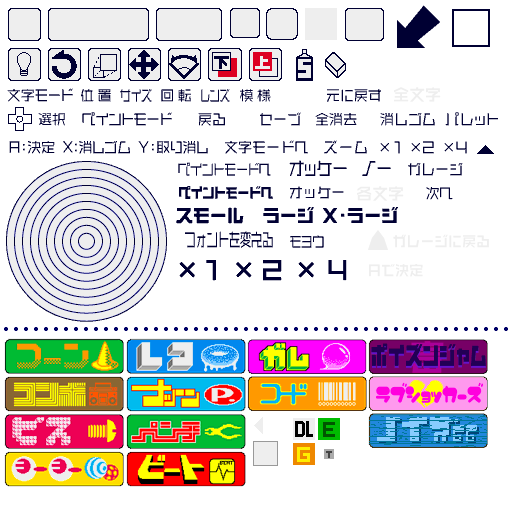 This texture is found in the file "MARKEDIT.AFS". At the bottom are unused icons with early character names on them.

This early restaurant ad can be found in the files DEMO13, DEMO14, DEMO21, DEMO22, and DEMO28. The earlier version is an obvious parody of Burger King.

Additionally, this early texture for the restaurant itself can be found in DEMO21, DEMO22, and DEMO28.

This billboard for watchmaker Swatch, specifically advertising their .beat time system (yes, this was a real thing they tried), can be found in the files DEMO13 and DEMO25. Since this is the only billboard in the game advertising an actual real life product, it seems an in-game advertising deal fell through. Interestingly, Sega would later go on to use the aforementioned .beat time system in the original Phantasy Star Online. 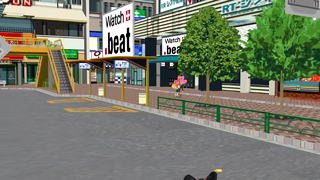 Bizarrely, the SEGA licensed anime Hi-sCool! Seha Girls uses the early image in its episode about Jet Set Radio, although the Swatch logo was replaced with a generic "Watch" logo for copyright reasons. Considering the fact the episode aired over 14 years after the game's release, it appears the animators accidentally used an earlier model of one of the game's levels.

This early movie poster can be found in the files DEMO17, DEMO18, DEMO19, and DEMO20. It is displayed in the center circle of Benten-cho with several other posters. The early version was a blatant ripoff of promo artwork for The New Batman Adventures. (Plus the name they chose was already copyrighted by a movie studio.)

These images are in the file "instructiontxr.bin", which is found inside the files "SEGALOGO.AFS" and also "U_SEGALOGO.AFS". These graphics appeared before an early demo version of the game. Notice the different designs of the green arrows and timer font.

This image is found in the file "PROMO.AFS". It shows an early title logo concept for the game. The text below (2000年春発売予定) translates to "Planned for a Spring 2000 release".

These icons are located in the file "GRF_SAMSUNG.AFS". Given their locations and original file names, they appear to be intended to be used as sprays, despite their content and lack of utilized space making them unsuitable for such a purpose. They seem to be designed as icons for media functions, but why they appear in a graffiti archive or Jet Set Radio in the first place is a mystery.

The game's original Japanese release included the song "Dunny Boy Williamson Show" by Deavid Soul. The track does not play in any other release of the game; however, the NTSC-U version still contains the song's files in the "JETRADIO" folder, rendering them unused.

The first portion of the track, which, in the NTSC-J release, plays at the beginning of Stage 2, Love Trap.

The second portion of the song. Interestingly, this song's main files are appended with the letters F, M, and R instead of the game's usual M1, M2, and M3.

The third and final portion of the main song.

Nearly identical to DUNNY_R above, with the only difference being a small clip of Professor K at the very end.

This file bridges the ending of Dunny Boy Williamson Show and the beginning of Everybody Jump Around.

The last unused music file is a transition between Dunny Boy Williamson Show and That's Enough.

The PC release contains most (if not all) of the files from the original release for all languages, including the How To Play screen featuring a Dreamcast controller, the three-option title screen graphics (with the Jet Grind Radio logo in the US title screen directory), and the voice clip of Combo calling out "Jet Grind Radio".

When the game was being localized, some changes had to be made to fit a more western market.

A revised Japanese version containing all of the changes that were made in the overseas releases, plus some other exclusive changes:

An updated version released in 2012/2013, based on De La Jet Set Radio with even more changes: