KiKi KaiKai is the first game in the ofuda-shooting series of the same name, better known as Pocky & Rocky in the west. It's also the only entry developed by Taito. 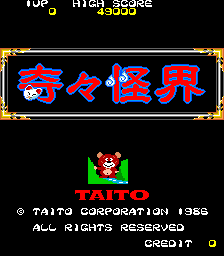 Taito Kumagaya Laboratory developed this game; the proof of this is a hidden company logo. To see it, get a game over, then hold 1P Up. When the title screen appears, the logo should appear above the copyright information.

As a bonus, if a coin is inserted while the logo is on the screen, both players will start with an extra life. 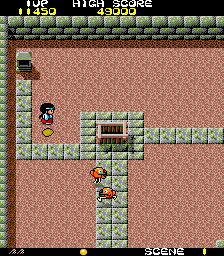 The wells that the Bake Uri enemies spawn from will occasionally produce different foodstuffs that can be shot down for power-ups. The game supports seven types of food, but only five are used. Put the following code in kikikai.xml to replace the turnips that appear on the 16th, 32nd, and 48th spawns with one of the unused vegetables:

Shooting the potato will spawn a Yellow Crystal...

...and shooting this sweet potato will spawn a Blue Crystal.

The game has six different death animations, with only one animation, 82, being unused. It's surprisingly graphic compared to the rest of the game, which is likely why it was cut.

Put the following code in kikikai.xml to make this animation play in place of the swatting death that's normally triggered by Manuke's rod:

The player's ofuda can be either white or red in the final game, but there are sprites for yellow, orange, and blue ofuda in the game's graphics.

Two unused, unreferenced item sprites: The first appears to be a kusudama, and the second is a den-den daiko.

There are four small flame sprites and five big flame sprites, but the game only uses one of the small ones and two of the bigger flames.

Both the Bake Uri and Bake Chouchin have sprites for all four cardinal directions, but due to the way the game handles the sprites for both the enemies and the Bake Uri food sprites, only the south-facing sprites are used.

An alternate, smaller version of the flames that Bake Couchin spit out. Instead of using these graphics, they use a red version of the aforementioned big flame sprites.

A graphic for an 8th piece of Bake Uri produce. Unlike the potato and sweet potato, there's no code associated with this tomato and the graphic isn't set up anywhere in the main CPU.

The Nyoro Nyoro enemies always come in from either the north or the south, leaving these east and west-facing sprites unused.

Scene 2's boss, Raidenou, has an unused set of sprites that feature him looking to the left, to the right, and with two different cockeyed expressions.

An animation of Raidenou hiding in a cloud with a sad expression. This might have been meant for an unimplemented death animation.

Raidenou never shoots out his big bolts of lightning if the player is directly to his left or right. There's only one of the eight frames needed for the big bolt anyway.

An unused set of graphics for the pants of Senzan, the boss of Scene 3.

Those graphics were supposed to be used for Senzan's walking animation: The way the lifted legs appear in-game looks like the graphics are cut off, while they look much better with the unused tiles.

The Scene 4 boss, Sanbai, is the only other boss with a unique-but-unused death animation. Seems she would've imploded.

The boss of Scene 6, Mao Kitsune, is the only boss that doesn't have its name pop up at the start of the fight. This is likely a mistake, as the kanji for the name is in the ROM; the first character 魔, is also used by Manuke, but the other two characters are unused.

This name shows up properly in the PC Engine port.

Two large hiragana characters, wa and ri. These are likely part of the word 終わり, meaning "end", and would be used during the game's credits sequence.

The "wa" graphic is defined at 0x1EE1B, and "ri" at 0x1EE24. What should be the kanji 終 is defined at 0x1EE12, but the tiles in the slots it references (00F8 to 00FD) were at some point overwritten with the graphics used by the flipping stone floor tiles found in boss arenas.