Pocky & Rocky is an overhead shooter starring Pocky, a young shrine maiden, and Rocky, her talking raccoon friend. Together, they must find and defeat the mysterious Black Mantle, who has driven Rocky's goblin pals insane. Don't get distracted by the game's overwhelming cuteness, lest you be utterly destroyed by its overwhelming difficulty. 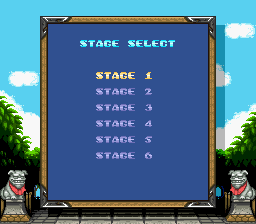 At one point during development, the game contained a fairly extensive debug mode. Although most of the code is missing in the final version, the text for the menu and various debugging screens still exists. To view these screens in an emulator, use the Pro Action Replay (PAR) code 00BC5C?? (where ?? is a value between 01 and 0B), enter the options menu, and turn off all but layer 3. 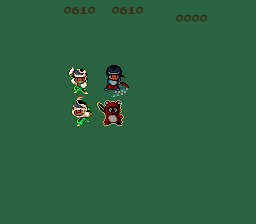 A graphics viewer partially survived, but it's unknown which of the menus shown above it's supposed to match up with. To access it, open the Options screen, then activate the following Pro Action Replay (PAR) codes: 00915B4F + 00915CBA or 7E000411

The options menu loads an alternate set of layer 3 HUD graphics from earlier in development. 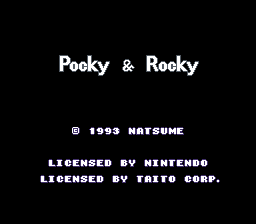 The international versions add an extra screen before the Natsume logo with the game's localized title and copyright info.

The Japanese release displayed a fancy animated Natsume logo with an Engrish slogan on start-up, while international versions had only a static graphic.

The key configuration menu is very similar between Japan and Europe, which shared colorful SNES controllers, while the North American version was toned down to match the controller in that region. This also entailed lightening the blue backdrop for the Options menu as a whole, presumably to make the duller NA buttons stand out better.

In the Japanese version, the boss of Stage 4 is a giant harpy. For reasons that should be obvious, the international versions change her into a bird knight, or at least give her some armor and a bird mask.

The stained-glass murals on the floor of the final stage were altered to make the faces being depicted on them look less demonic, giving the face some extra anti-aliasing in the process.

Bizarrely, the European version completely removes all story cutscenes from the game, presumably as a hasty way of avoiding having to translate the dialogue several times over for countries that don't speak English.