Klonoa: Door to Phantomile is the first game in the Klonoa series, featuring an anthropomorphic mammal named Klonoa. This game was later remade for the Wii 11 years later.

There are three dashboard sprites for the area where the rescued Phantomilians are tallied that go unused: one with a picture of Balue, one with Lephise and one with Nahatomb. There is no empty version of any of the three. One can only assume that the Balue sprite was intended to be used in the Extra Vision instead of Breezegale’s crest and the Nahatomb sprite would be used in the Final Vision instead of Cress’ crest, but the Lephise sprite is anyone’s guess. 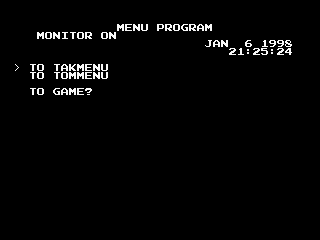 This is the Debug Menu home screen. It can be accessed by setting address 10E5EC to 01 in the US version. As soon as the variable is changed, it enters that screen automatically. In it, one can see the title "Menu Program", where it has the string "MONITOR ON" and the probable build date, JAN 6 1998 21:25:24. In this screen, pressing Circle accesses the 3 available menus. You can move the cursor anywhere, but only the options with text do anything. The triangle button changes the MONITOR status to OFF or ON consecutively, but this does not seem to work at all. This function works on almost all of the debug menus available. 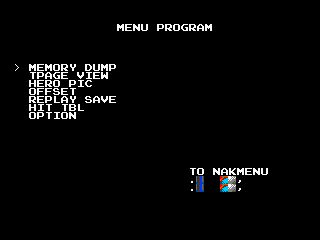 This menu does not work right. After entering it, there is no way out, as none of the options work. 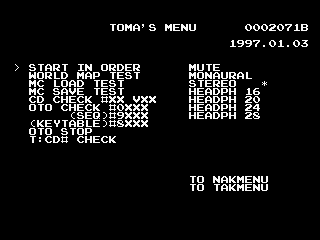 This menu is a menu for testing game sounds and animation through the "World Map Test" menu. The World Map Test option, after accessing it and pressing Start, crashes the game. The keys have different functions in this menu.

START IN ORDER: Starts the game from the title screen. The modified game audio options on the TOMA'S MENU screen do not take effect when accessed by this option.

WORLD MAP TEST: Access another area for animation testing. It is not known how it works yet.

MC LOAD TEST: Load MC test. It does nothing on this menu.

MC SAVE TEST: Save MC test. It does nothing on this menu.

CD CHECK: Game soundtrack test. It initially starts as #XX and VXX and after being selected it defaults to # 00 and V7F. The songs range from # 00 to # 43. The "V" represents the volume of the currently played music, ranging from V00 to V7F. Each song that is played has a default volume that is placed automatically.

OTO CHECK: Other sounds in the game relating to noise. There are several options without sounds and many unused sounds. (SEQ): Sounds that refer to Klonoa's voice, items being picked up and some songs that are not background music in the game. Some sounds when accessed stop the game.

(KEYTABLE): Sounds referring to wind, smoke, doors opening and other things of gender. Many sounds here are repeated with that of the above options.

The next options only work if they are accessed by "TO NAKMENU "and" TO GAME? "Soon after.

MUTE: Checking this option causes the game to have no sound at all.

MONAURAL: The sound of the game is like Monkey.

STEREO: The sound of the game is Stereo.

HEADPH 16, 20, 24 and 28: The sound of the game is Stereo headphones with some slight variations. 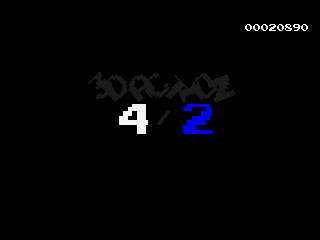 This screen is to go to the phases of the game. Vision 1-1 through 6-2 are the normal phases of each view. Visions with subsection 3 (i.e. 2-3, 4-3) are the end of each vision. Vision 7-1 takes you to the final cutscenes of the game and you can not skip the final cutscene nor the credits using this option. Vision 7-2 activates the initial cutscenes after beating the vision boss 6-3 and after that initiates the final vision "The Dream at Nightmare's End." Vision 7-3 is almost the same as 7-2, only it cuts off some early cutscenes. 8-1 is the Extra Vision.

Vision 8-2 accesses the same view from 1-1, but with severe phase errors. Klonoa will have no collision with the ground or walls. There will be no enemies for Klonoa during the entire phase. You can skip the initial animation of the phase. Pressing the jump button freezes the game. The 8-3 view just crash the game.

Vision 9-1 accesses vision 1-1 but hangs after the initial animation of the phase. The 9-2 view locks before the phase starts only with the sound of smoke before the machine hits the bell. The 9-3 view equals 8-3, just crash the game.

In addition to the above menus that can be accessed, there are several more texts inside in KLONOA.BIN. These can be found at the addresses below in the US version: