Koko Adventure (코코 어드벤쳐) is an unlicensed game released in Korea. A US release under the name of Buzz & Waldog was planned, but cancelled. The game is pretty similar to Toto World 3 (Cave Dude), another game from Open Corp. for the Sega Master System. It also has a lot of content stolen from other games, including background graphics from Super Mario World and the sound engine from Tiny Toon Adventures. 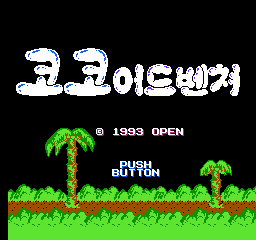 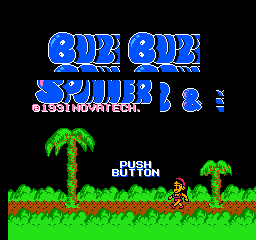 Offset $C000 in CPU address space ($1C010 in the iNES file) is a region switch, which changes how the title screen is rendered. In the Korean version, it is set to $FF, and in the US prototype it is set to $00. Changing the switch in the US prototype will display the Korean title, albeit with an incorrect palette. In the Korean version, however, this will display a tilemap that doesn't match up with either the "Spinner" or "Waldog" variants of the US title, although it does load the appropriate graphics bank. Judging from the layout of the tiles, it's possible the original US title was simply "Ko Ko Adventure".

Both versions of the game contain a rather interesting Easter egg. If you rack up 50 minutes of actual gameplay, the screen will go black and display the word "REST" in Korean or English, prompting you to take a short break. While you can skip this screen and reset the timer by pressing Start, if you actually take the game's advice and rest for at least 5 minutes, you'll be rewarded with an extra life!

The timer is paused between stages, on the game over/continue screens, and while the game is paused, and is reset if you ever return to the title screen and start a new game. A less tedious way to see this screen outside of emulation is to use the Game Genie code PEOKOGZL, which reduces the wait to one minute.

An unused English title screen logo featuring "Spinner" instead of Waldog, as well as letters that would have spelled out "Inovation Tech." [sic], the would-be US publisher. It seems an overseas release was planned from the beginning.

Interestingly, three early frames for Waldog can be found amongst Koko's graphics. These are also present in the US prototype.

An early Open Corp. logo, which can also be found on the doors in-game. Its presence is a mystery, as there are other early Open Corp. games which use the final logo, including Toto World 3(Cave Dude). This is also present in the US prototype.

While the "REST" graphics at the top of this bank are used for the aforementioned Easter egg, the remainder is not. They seem to be artist's notes or doodles of some kind.

Track ID $74 (track 6 in the NSF) is unused in both versions of the game. To hear it at the title screen, use the Game Genie code GNNATOEA.