An official emulator on a disc that features five NES games from the two big Konami franchises that start with the letter "C". It was soon discovered that the game contained somewhat altered NES ROMs of the Castlevania and Contra games, mostly to remove references to Nintendo. The ROMs themselves were released after the discovery was posted on a message board in December 2002, and they've been available on the internet since then.

Nearly 18 years later, the compilation was rereleased on GOG with the DRM removed.

The Beginning of a Legend... 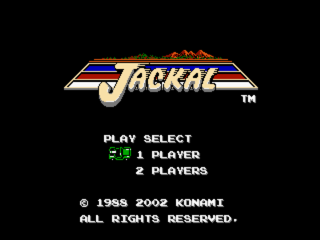 Despite having no real connection to either Castlevania or Contra aside from being made by Konami, a Jackal ROM is present in the executable. The fact that it has also been edited suggests it was meant to be a playable bonus, but Konami never released a method to play Jackal in the emulator itself.

Note that if you change the value of this memory address before the game selection menu loads completely, the program will crash.