LSD: Dream Emulator is an eccentric exploration game based on a dream journal. The person who created the game was also responsible for the equally-strange Eastern Mind: The Lost Souls of Tong-Nou. 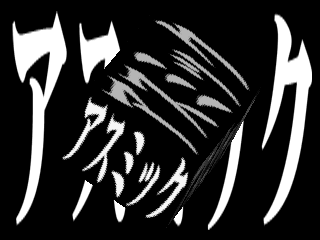 A Japanese variation of Asmik Ace's logo stored with the intro/main menu assets. The text says "Asmik". There is code to load it right before the OSD logo.

A door for Bright Moon Cottage that has a completely different style than the used one.

A blank door for Bright Moon Cottage, when the only door in the level has text on it. This is the texture the 3D door uses.

A bathtub for Bright Moon Cottage. Probably would have been seen behind the WC door.

Curtains for Bright Moon Cottage. The demo movie shows these would have gone next to the windows.

This used texture in HAPPYTOWN has 4 accidentally erased pixels in the top left corner, except in its Downer variant. The blank pixels can just barely be seen in-game. 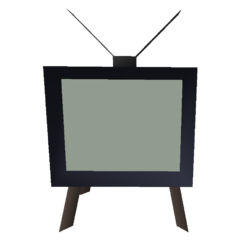 The TV is set to display this pale green color before the ghost image overlays it.

A model of a 3D door is in the files of Bright Moon Cottage. This appears to be from an earlier version where the player could open doors, something shown in the 1997 Demo Movie. 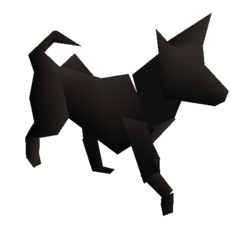 SYMDOG.MOM is a model of a dark gray dog, created 4 months after the Gray Man. The Gray Man is in SYMSPY.MOM, so this dog might have played a similar role. It has two animations: one is for walking forward, while the other seems to be for turning. The model was later reused in Tokyo Wakusei Planetokio, another game by the same developers.

These tree models appear at the end of every major level file for The Natural World, even if they're not used in a particular section. 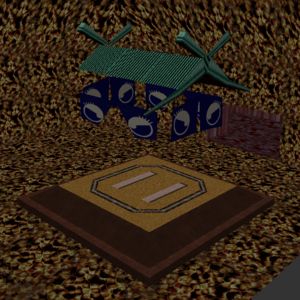 This green roof above the sumo ring in Flesh Tunnels is fully detailed, even though the player can't possibly stand high enough to see it.

A room exists behind the always-closed WC door in Bright Moon Cottage. The side of the room has a small extrusion, around which there are no walls. This room is likely where the bathtub would have been.

Event 5 and 6 are the same cutscene, except for a different internal chunk header. One of them is unused, but since both videos are totally identical we'll never know.

The C track for Clockwork Machines doesn't play because the tempo is set to 0. Unlike tracks that are supposed to be silent, this is a genuine mistake and the file has song data in it. Below are renderings with the tempo set to 120.

The circle button can be used to interact with various entities, despite the instruction booklet claiming it doesn't do anything. Functions include riding the train and ferris wheel in HAPPYTOWN as well as killing the wolf that attacks the player in Temple Dojo.

While the game is paused, hold Select and △ to reset all data related to the current playthrough. This puts you at Day 1 with no graph data. 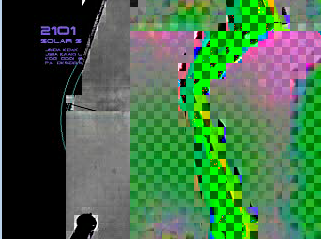 ZDUMMY.STR, located in a folder also named ZDUMMY, is a 60mb garbage video file that is most likely intended to move data to the outer region of the disc. Most video players will reject the file as corrupt, but if forced to play a single frame will appear. Besides the garbage data, text that appears to read "2101/SOLAR S" with some more illegible text beneath it is present.