Landstalker was Sega's answer to Zelda - and a really good one at that!

Unused palette-swap for the Reaper enemy.

Unused palette-swap for the Worm enemy. 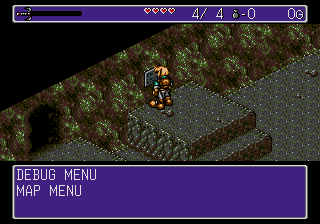 To activate the debug menu, stand in front of a sign or NPC and press A or C on Controller 1 while pressing Down on Controller 2. Pressing Left or Right will cycle through the different options which include map, flag, sound, and music menus. The map menu allows you to warp to a selected area and the flag menu allows you to set how far you are currently in the game (within the range 1-31, 1 being "Massan" and 31 being "Cave at the top"). The sound and music menus work like a normal sound test.

Other debug mode features can be activated using Controller 2: 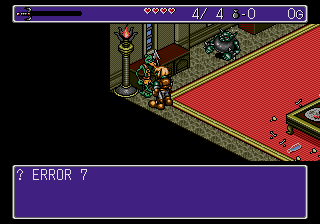 There is an error handler for undefined messages in the game.

Additionally, there is a beep code when certain error criteria are met (e.g., too many sprites on-screen at one time). The debug mode has to be activated in order to hear the error codes. The beep codes play certain sound effects repeatedly between 8-16 times, and the error can be identified by the sound effect played.

Before entering the Chicken Race room, hold A + C + Start on Controller 2. This will change the four chickens into enemy sprites.

Present after the ROM header at 0x202.

The Bunnygirl Costume became the Shortcake.

The G-String was changed to the Pawn Ticket.

This scene was made inaccessible in the US and European versions by adding a maid blocking the entrance to Kayla's room. The scene itself, however, remains in the game and was even fully translated!