Lotus II: RECS is the Genesis version of Lotus III: The Ultimate Challenge. Got that? 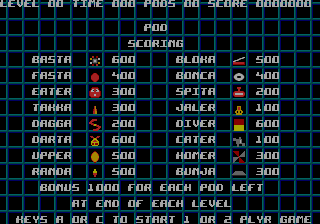 Enter "POD PLEASE" (without quotes) as Player 1's name and start a game. You get taken to this little shoot-'em-up game, which is a remake of Lotus III main programmer Shaun Southern's 1985 game P.O.D.: Proof of Destruction. B shoots. You can only move around the grid, and explosions will temporarily break the grid apart. Good luck!

This song is used in the Amiga version, but not in the Genesis version. It could have been scrapped due to the faulty instrument conversion.