The PlayStation Magical Drop III is a port of Data East's final arcade game, with a later re-release adding an exclusive port of Magical Drop Plus 1!.

The re-release version got a rather quick and dirty localization in Europe.

The tracks for the intro and ending cinematics. These were made into FMVs for the PlayStation version and while these songs are used in said FMVs, the quality is noticeably lower. 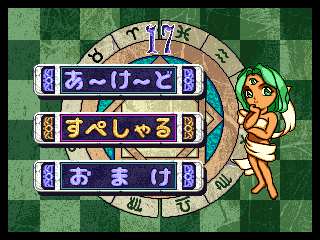 The Japanese version starts up with a menu with the additional options of Arcade mode and Extras, both of which were removed from the European release.

The character Fortune was renamed "Luck". Additionally, while not renamed on the character select, Temperance is referred to as "Modesty" many times throughout the localization.