MediEvil is a platformer that focuses on a somewhat goofy knight named Sir Daniel Fortesque. Before failing to defeat an evil wizard, his eye got shot out by an arrow. But it's worse than that... he's dead, Jim.

Located in the game's memory (all versions) is this silly message:

According to the game's lead artist Jason Wilson, this is an inside joke about James Busby, one of the game's main programmers. This was later confirmed by Chris Sorrell in a magazine interview.

Present in MEDRES.MWD, starting at offset 0x0000000 in all versions. 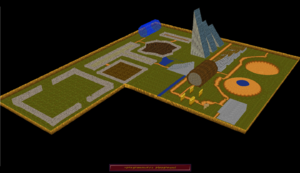 The model for what was a testing environment during development called the Programmer's Playground can be found within the MEDRES.MWD resource file along with scripts and collision data for the level. The level does not have an overlay file in the OVERLAY folder however, rendering it unplayable in-game (at least without extensive modifications to the game).

According to developer Chris Sorrell, the level had geometry built to represent all the different types of landscape seen across the game: different slope gradients, platform spacing for jump height and length and so on. The level also had a section with enemy pens where they were tested out before being put into the other levels.

This FMV, called 7AV, was meant to be played before a removed level that involved guiding the inhabitant of the protagonist's skull, Morten the Worm, through an abbey of mad monks and finding a key. The video can be accessed in-game using the cheat menu's View FMV option. The FMV is present and untouched on the Japanese disc, but it cannot be chosen from View FMV.

There is also another FMV, called 10AV. When played using the debug menu, it plays the 9AV FMV, but ends a lot sooner. The FMV has no file on the disc, which is why 9AV is played instead. It seems to have had a runtime of 33 seconds.

These tracks are accessible in-game by using cheats. They can be found under the music tab in the sound test menu.

This was supposedly to be used in a removed level featuring Morten the Earthworm.

This track is used in the background of track 12. However, it is part of that track and the separate jingle is never used in the game. In the Italian and Spanish versions of MediEvil, the Game Over track is replaced with this one.

Soundwise, this melody is reminiscent of track 2, used in The Ant Caves level.

Soundwise, this melody is reminiscent of track 7 above.

Soundwise, this melody is reminiscent of track 9, used in the Pumpkin Gorge level.

These tracks are accessible in-game by use of cheats. They can be found under the speech tab in the sound test menu.

Look at you, it must be 500 years since you were last on my ferry - and you don't look a day over 400. Now here we are. Zarok's magic has caused the lost mythical town of Mellowmede to rise from its watery grave! See you soon!

The Boat Man was originally supposed to say this at the beginning of The Lake level.

Well about time too, thought I was going to be a permanent addition to this mossy hell hole!

A Gargoyle in The Enchanted Earth level was meant to say this.

It is unknown where these mumbling sounds (106-111) were going to be used. It is possible that they are early voice lines for Dan.

Beat out them fires master! The 'airs on moy feet is startin' t' smoulder...

This was to be used by the farmers in The Haunted Ruins level.

We must double our efforts to protect the Master!

This was to be said by the Gargoyles brought to life by Zarok in the Cemetery Hill level.

In MediEvil, books are used to guide the player and give him background information about the world. These books can be found within the level files found in the OVERLAY folder on the disc, but cannot be accessed in the game itself.

Level: Return to the Graveyard

Level: Pools of the Ancient Dead

There is a master cheat code which, when entered, enables new options in the pause menu. These options give you access to a variety of things such as Level Select, Sound Test, individual cheats (money, weapons, energy, etc.), and more. Enter the button combination for the appropriate region to access it. The sound of a groan will confirm activation.

This view will allow you to warp to any section of the level. To enable it, go to the Camera option, set the plug-in to 8, and press Start to resume gameplay. A sword cursor and text will appear on the screen. Pressing X will switch between Focused and Free-motion modes.

In Free-motion mode, L1 moves backward; L2 scro b lls downward; R1 or Triangle moves forward; R2 scrolls upward; the D‑Pad rotates the camera. X would move the camera backward as well, but it gets interrupted by the switch to Focused mode.

To warp Dan to the sword cursor (which floats mid-air and does not snap to ground), pause gameplay, go to the camera option again, and press X to change the plug-in type to Clear. Press Start to resume gameplay at your selected destination. Most dark zones have no collision, where Dan will fall and die.

Use this GameShark code to access this feature in the Japanese version:

Just Dan mode allows you to start any level free of items and enemies. It will also disable the rendering of some environmental objects such as gates, doors, etc. leaving only Dan present. Use this GameShark code to access it in the Japanese version:

The starting FMV with the frightening music, TitleAV, appears to be replaced with silent and simpler "Sony Computer Entertainment Inc. Presents" text followed by a cut to a new title screen:

However, by using an external program to play TitleAV’s replacement, SCEIAV, we can see that the original FMV is actually still present, but has been edited. The "Presents" text slides in from the right and the background fades out before the FMV’s original text can appear:

Daniel wears a helmet in all of the game's FMVs except for the final cutscene where it is blown off. The helmet also appears as an item in Dan's inventory during gameplay and can be removed at will, but the FMVs won't change to reflect this. Daniel's eye was also given an iris, whereas in the original it only had a black pupil. This change was retained in all versions of the game's sequel.

Other FMV changes include:

The loading screens and game over screen featuring Sir Dan now also feature his helmet in some capacity, while the loading screens after finishing a level have been given more variety depicting not only him, but also various heroes from the Hall of Heroes. The "LOADING" text was given a more stylized font (a heavily edited version of "Harrington") and now shows up below the loading images for the map screen.

Other UI differences include:

The Life Bottle in Dan's Crypt is now empty and is textured blue to demonstrate this. The Life Bottle has to actually be filled up in order to be of use. No other Life Bottles in the game come empty.

Other gameplay differences include:

The game speed is slower for the European versions due to the refresh rate, however the camera movement in the title sequences of all versions are mostly the same.

In the US and Japanese versions, the directional arrows on the map of Gallowmere are red and green for invalid and valid paths respectively. In all PAL versions, there are only arrows for valid paths, and the arrows are white. Furthermore, the PAL arrows move in and out slowly, while the other versions blink steadily.

The enemies of The Asylum Grounds level are clothed in monks' robes, while the other versions feature a tattered white outfit with red/yellow striped overalls. And in the same level, there is no book explaining what to do for the sad clown.

In The Ghost Ship, the pirates notice you a lot sooner than in later releases.

In the Italian and Spanish versions, the music that plays during the game over screen is very different, and is actually an unused track in all other versions. The original game over track is deleted and replaced with the final one. Furthermore, they have the same track number in the sound test.