After you receive a golden ticket in the mail, you head off to the location of Papa's Burgeria to claim your prize: employment!... Regardless, this game's got improvements over its predecessor, like actually being able to use your earned money to buy upgrades.

While technically used in both this game and Papa's Pizzeria, the flipping animation for the Customer Chart shows a character named "Johnny" who can be seen for a brief period of time. He does not show up anywhere else in the game, nor does he show up in Pizzeria. 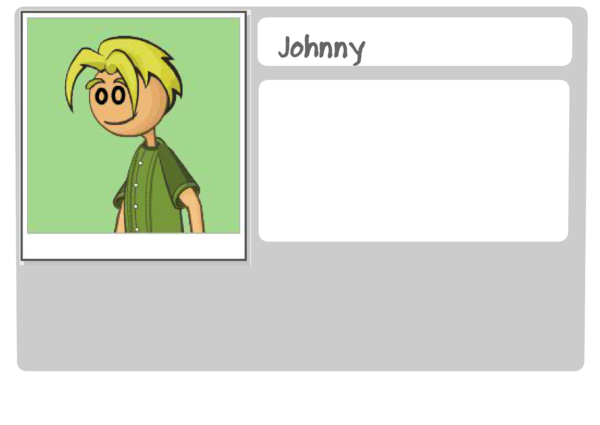 The reason why he was cut is unknown, but he would make his official debut (albeit with some changes like a mustache) as the Closer Pinch Hitwell in Papa's Hot Dogeria, five years later with his name changed due to the addition of another Closer named Johnny in Papa's Pancakeria who looks nothing like this Johnny (being a brown haired lumberjack with large chest and a scowl,) as Pinch's Flipdeck card states that he "had his name changed from Johnny to avoid confusion." (It was probably a coincidence, however, that Johnny and Pinch are both closers as Johnny from Pancakeria was created for a beta tester of the game whereas Pinch is very clearly based on this unused Johnny.)

Various places in Papa's Pizzeria uses game generated text instead of image text, usually when the text is mostly the same except for minor changes like names of things and numbers. 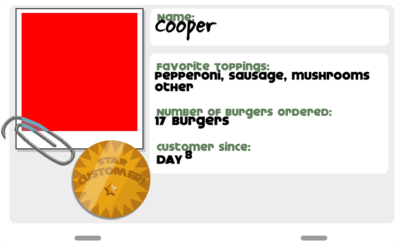 Just like in the previous game, there's placeholder text on the customer profile page. However, the Favorite Toppings listed are leftover from Pizzeria, as you can't order pepperoni, sausage, or mushrooms in this game.

The red square seems to be an overlay to help cut-off the customer full model so that it fits within the profile frame. In editor the Star Customer! badge will flash between not being there, bronze, silver, and gold.

Mixed in with all the customer body parts are some completely empty sprites that are meant to be certain body parts for specific customers who in the game, lack those body parts.

Cooper, Wally, Marty, Mindy, Cecilia, Clover, Gino Romano, Claire, and Edna were all supposed to have separate sprites for back hair. Some customers like Cooper, Wally, Marty, and Gino don't have any back hair in the first place, so it's unknown why they have these files. Other customers like Mindy, Cecilia, Clover, and Edna may have had their ponytails and hair buns separated from the rest of their hair to be animated like back hair but they were merged into one sprite in the final game.

Kingsley, Olga, Big Pauly, and Vicky were supposed to have neck sprites, but in the final game their necks cannot be seen. This implies that at some point they may have had visible necks.

Four customers have a blank hair sprite; Little Edoardo, Hugo, Papa Louie, and Roy. Interestingly, Little Edoardo does actually have hair in the final game but it's merged with his head sprite; presumably, it was originally supposed to be animated separately before being merged with the head.