All the day versions of the locked rooms are (normally) inaccessible. You are not supposed to get a key for them until after dark, though it is possible to use cheats/hacks to obtain one and get early access to the rooms.

The day and night versions of this room have some different angles used for the bedrooms. A green door is pretty visible here. There is no layer separation here, so it is easy to walk on top of beds and through walls.

As with Room 3, there is no layer separation. The bed light is in a different position and a lamp is added to the desk for the night version. 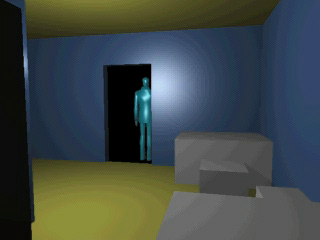 The least complete of all the inaccessible areas. Not only does this lack anything besides simple shapes, but there is also a model representing the exit/entrance. The lighting in the room is poor. Most of the time, Aya appears as a black blob on the screen with a shadow underneath.

Bizarrely, the door exit trigger is not at the door, but near the left side of the laundry cage. The Jerry Can can be picked up here in nearly any spot in the room and counts towards triggering the Zebra Stalkers crashing through the glass ceiling, though this will not happen until Aya enters the room at night.

This area cannot be accessed from the game map; it will crash the game. Most of the flavor text was included, except for the register puzzle. Saving in this room results in a save file which leaves the player trapped in a loading screen with nothing to do but read some flavor text.

Unknown Weapon, Item #133
The weapon looks like a P229 without the silencer and flashlight. It is possible the silencer and flashlight were intended to be add-ons, much like the Snail Magazine for the P08. It has no attached ammunition, stats or attacks, making it ineffective in combat. It uses the P229's reload animation if you manage to win a battle while it is equipped. 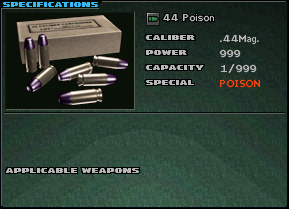 44 Poison, Item #168
Only the Mongoose can equip this ammo. This has the same critical rate as the 44 Magnum / 44 Maeda SP ammo and shares the 44 Maeda SP's unique properties (Poisons targets, knocks No.9 back, etc.). 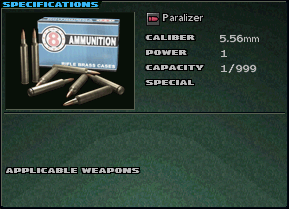 Paralizer (sic), Item #175
The M4A1 (With any attachments) and the M249 can use this. It has the same critical rate as 5.56 Rifle Ammo. While not in the specifications, the Paralizer does inflict PARALYSIS on a single target. 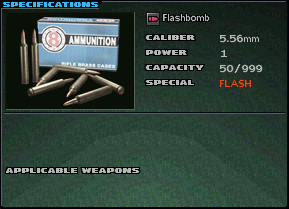 Flashbomb, Item #176
The M4A1 (with any attachments) and the M249 can use this. This tends to knock down targets, but many are immune to its effect. 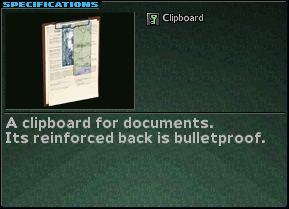 In a way this item is used since it is handed to Aya in a cutscene, but what appears in your KEY ITEM page is all the stuff that was attached to the clipboard, not the item itself.

Going unused are items 51-53, which have the letter R for their picture, and item 230 which has the letter Z. Both the Japanese and North American versions use this, though the R is in different positions.

Tonfa Equipment
There is an unique icon for the Tonfa that remains unused. The palette for this icon is unknown but it is possible the grey icon palette would have been used, given that Tonfa's final icon is a grey gun.

Parasite Eve II has 256 slots available for inventory. Aya normally only uses 120 of them:

The other 136 slots remain unused. Slot #s 30, 31, 40 and 41 have a Recovery1 and Slot #32 has a Stim. They remain unavailable during the game and are removed from your inventory when the player starts their trip to Dryfield.

Several rooms in all areas of the game contain unused combat data. These can be accessed through memory editing, but are never enabled within the game. Many of the enemy compositions are similar to enabled encounters, but their layouts will be different and never include any item drops.

Inside SLUS_010.42 at 0x57B00 is the string "Where am I?", which is set for a handful of rooms, but never displayed in them. This was likely a piece of placeholder text before the name was entered into the game. It's also not located with the regular resource files.

In the inventory commentary, two lines are not used when handling inventory:

"I don't no" is spelled incorrect and the AS12 does not have any attachments.

Parasite Eve 2 uses their version of a GPS system to show areas the player has explored. On some occasions, the player can access a map of the area and fill it in with areas which have yet to be explored (They will appear dark). However, some rooms cannot appear dark since the player must explore certain areas before they can update the whole map.

Below is a list of rooms that will never appear dark during normal game play: 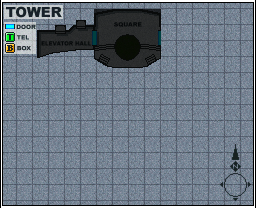 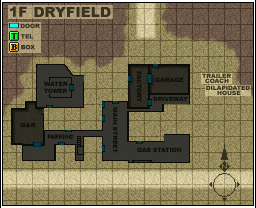 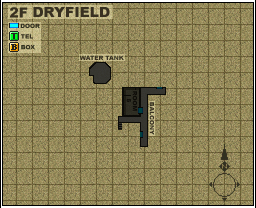 On both discs, there is a really odd cinematic of sorts. Its file name is DUMMY.DMY and is physically at the end of both of the discs. It's very primitive visually and appears to be a DOGA animation contest entry. It also plays twice.

Changes made from JP to NA Version:

The JP version of 1st-level Recovery is misspelled "Pain Reliver" and is smaller in size than the NA version.

The JP version used a bottle of Perrier, rather than a generic carbonated water bottle like the NA version uses.

The JP version uses a full-blown medkit with a syringe and two bottles. The NA version loses the case and syringe. This may account for (In the NA version) the item being called a Medkit when it has not yet been identified as Penicillin.

The JP version of purchasable spells all use the same inventory image, which happens to look like the Medkit image, but with different colored labels. The NA version uses color-coded vials to indicate what element the spell is.