Parodius is a port of the loony arcade spinoff of Gradius with cameos from other Konami IPs.

An ID string listing the build version and date can be found at the end of the Japanese version's PRG ROM:

It's likely the "mask ROM" version of the game; most of the final versions of Konami's games feature "MAST" or "MSTR" as the beginning of the string, to indicate the "master" or "final" build.

The numbers represent the date. So, this build was compiled on September 16, 1990.

As with most of the games Konami has published after 1990, the Japanese version of the game features a copy-protection routine. It calculates the CHR ROM checksum to ensure its consistency, and additionally checks for the string "© konami" in VRAM, setting a flag if either or both of the tests fail. If the flag is set, the game will only allow you to play Level 1. Frustratingly, this can be induced if the game cartridge is dirty or inserted improperly.

This can only be found in the Japanese version and translates to "The End".

The title screen was completely redone for the European release: The Japanese version has a recreation of the arcade version's title screen, featuring a small Parodius logo that has an animated Takosuke moving two fans and the game's title in Japanese; the European version removed the latter and has a bigger Parodius logo that no longer features the unique Takosuke animation, instead it has the Vic Viper's in-game sprite, which replaces the Japanese version's small Vic Viper ship as the cursor for the Player selection. Additionally, the copyright text is pink in the Japanese version but white like everything else in the European version.

The European version shifts the status bar 8 pixels downwards to make use of the extra lines of PAL resolution.

The European version has a different and funnier ending in which it says "Is this the end of GRA...", only to delete that and type in "Parodius?!?!!". 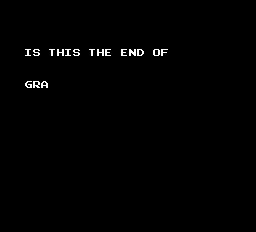 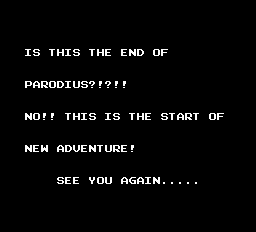 The European version features a completely different piece of music from the Japanese version that plays during the credits. Both Japanese and European ending themes for the Famicom/NES versions differ from the music played in the arcade version and other ports (except for the Game Boy version, which also uses a different ending song).