In Planet Puzzle League, in the VRAM, where the UI elements are located is hidden tiles which has a mysterious bear in the picture. It has Japanese text which simply reads "kachi". (かち) It applies to both vertical and horizontal orientations of the game. 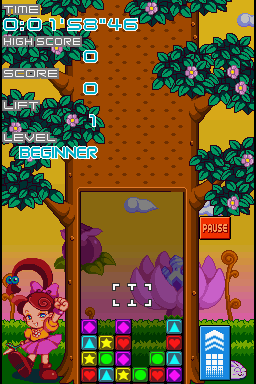 Exclusive to the Japanese version is a stage themed around Lip, the protagonist of Panel de Pon (the Japanese version of Tetris Attack). This is the only remaining trace of the series roots, with the rest of the game using a widely-criticized "techno" motif. Since Panel de Pon had never been released in its original form elsewhere at the time, the stage was dummied out in the US and European versions, but not removed! Action Replay code 02330F08 0000000A (US) or 0234B5E8 0000000A (EU) will re-enable it in Time Attack, Endless, and Garbage Challenge modes.

The Backgrounds 1 and 2 are swapped in the International Version.

The title screen and menus were recolored in the US and European versions. Also, some of the menu options have different names.