This is a sub-page of Pokémon Red and Blue.

The Elite Four have walking sprites, but these are never seen in-game since they stand in one position and don't move. Colorized versions of Lance's walking sprites were used in Pokémon Gold and Silver.

For some weird reason, the US Red and Blue still have the full tileset of the original Japanese "Pocket Monsters!" logo for the Super Game Boy borders. The European versions overwrote the logo as needed.

Red, Green, Blue, and Yellow have many tileset blocks that are never used in any existing map. Tileset 13 was added in Pokémon Yellow.

There are also used tilesets that contain unused tiles.

The cave tileset contains some graphics that resemble the standard rock graphics, but they appear to be shinier and transparent, suggesting that it might be ice.

The underground tunnel appears to be missing some graphics for the wall.

Below is a recreation of how the tiles may have been arranged. It appears it was intended to have some sort of lighting fixture on the wall.

A sign is present in this tileset but is unused. Other maps do use the graphic, however. 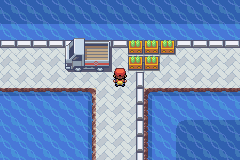 The truck in the Game Boy Advance remake.

At Vermillion Harbour, there is a truck and some boxes on the map that aren't normally viewable.

It is possible to see them using a number of tricks, however:

Despite popular childhood rumours, the truck is only for decoration and does not have anything hidden under or around it, save for a Lava Cookie in the GBA remakes.

Retrieved from "https://tcrf.net/index.php?title=Pokémon_Red_and_Blue/Unseen_Graphics&oldid=523911"
Categories:
Cleanup > To do
Subpages