The game started out as Banjo-Kazooie: Grunty's Curse. Game development began in mid-1999 for the Game Boy Color, but at some point was completely changed due to the newly announced Game Boy Advance. Only some sprites remained and were reused later for Banjo-Kazooie: Grunty's Revenge, albeit with major tweaks. The scenario was different, and some level ideas were scrapped.

Two worlds were planned but not included in the final game: Area 6, "MohendraBanjo", and Area 7, "Fiery Furnace". The latter area did appear in a prototype of Grunty's Revenge, but was combined with Freezing Furnace in the final game. 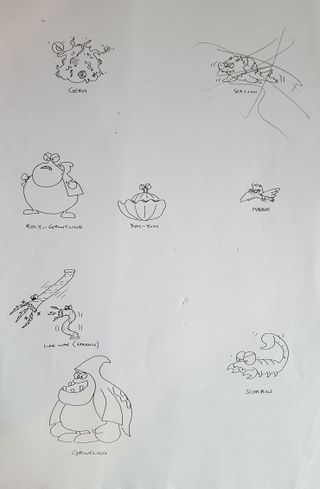 Gruntlings and Yum-Yums were in Banjo-Kazooie, but the remaining enemies in this drawing are new.

A number of transformations were planned for Grunty's Curse, such as:

There were considerations for a handful of secondary functions for transformations that were left on the cutting room floor:

While no prototype of the GBC version is not to have ever been made, a team of artists assigned to the project at Rare produced a multitude of digital art assets intended for one in 1999. These included sprites of some of the main characters, as well as designs for UI screens like a pause menu.

The following gallery includes more assets intended for the game:

Retrieved from "https://tcrf.net/index.php?title=Prerelease:Banjo-Kazooie:_Grunty%27s_Revenge&oldid=732258"
Categories:
Cleanup > To do
Games > Games by content > Prereleases